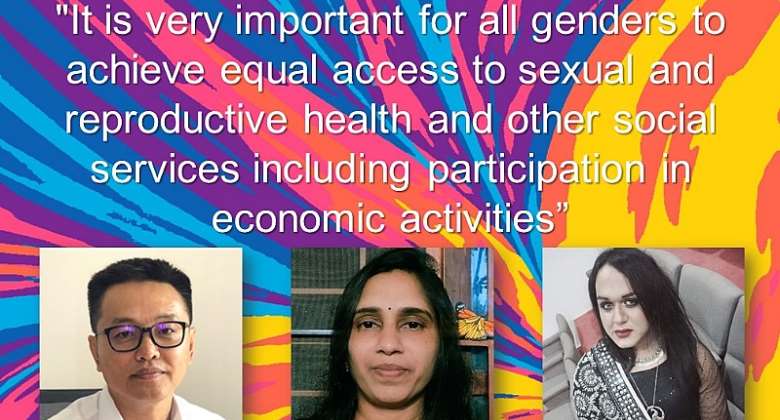 "...All must be encouraged in an understanding of the fact that all human beings are born good, but they may be endowed with different gifts. Deviations from preset norms should not form the basis of ostracism. There should be no discrimination on the basis of one's gender identity. We need to try to see it as a gift and not as a threat...". So had said late Sister Marian Moriarty IBVM, a former Superior General of the Loreto Sisters, when I had met her about a decade ago. These words, coming from a devout Catholic, are indeed encouraging and would help in removing the misconception that religion goes against the so called 'out of line behaviour'.

Yet discrimination and stigma in the name of tradition, religion or culture continues to plague the lives of LGBTIQ+ (lesbians, gays, bisexuals, transgender, intersex, queer and other sexual orientations, gender identities and gender expressions), denying them the basic human rights to live with dignity and equality.

Ensuring respect and equal rights among all individuals, regardless of their gender identities, gender expressions, and sexual orientations, is a crucial issue confronting all countries, including those in the Asia Pacific region.

"It is very important for all genders to achieve equal access to sexual and reproductive health and other social services including participation in economic activities. It is also an important element to achieve universal health coverage that promises to leave no one behind", said Dr Chivorn Var, founder Executive Director of Reproductive Health Association of Cambodia (RHAC), and convener of the 10th Asia Pacific Conference on Reproductive and Sexual Health and Rights (APCRSHR10).

transgender rights in India
The first ever official count of transgenders in India, as per the 2011 census, puts their number as 4.9 lakhs, out of which only 30,000 are registered with the Election Commission. But activists estimate the actual number of transgenders to be several times higher than this. The landmark judgement by India's Supreme Court in 2014 in National Legal Services Authority v. Union of India granted legal recognition of the third gender, exempted biological evaluation of gender for the purpose of law, and upheld transgenders' right to decide their self-identified gender as male, female or as third gender. It also affirmed that all the fundamental rights granted under the Constitution of India will be equally applicable to them.

Then again, the Transgender Persons (Protection of Rights) Bill, passed by the Parliament in 2019 prohibits discrimination against transpersons (those whose gender does not match the one assigned at birth) in employment, education, housing, healthcare and other services. However, while allowing self perception of gender identity, it mandates that each person would have to be recognised as 'transgender' on the basis of a certificate of identity issued by a district magistrate after proof of a sex reassignment surgery is provided. Transgender people believe this is coercing them into surgery whereas the demand for free or low-cost sex reassignment surgery has not been met. Also, the Bill strongly focuses on trans women (or hijras as they are called) and there is little emphasis on the intersex, queer, gender non-conforming people, and even trans men in the Bill.

ground reality
A systematic review, based on 30 studies done on transgender issues in India from 2000 to 2019, presented during APCRSHR10 by Dr Saritha P Viswan of Population Research Centre, India, reveals the ground reality of the problems faced by the transgenders in the country. Despite the positive amendments made in the country's laws to ensure equal rights to all individuals and eliminate discrimination on the grounds of gender identity and sexual orientation, transgenders are subjected to various forms of gendered violence, harassment and discrimination both at home and in public spaces. Families do not accept children behaving against their biological sex; there is physical and verbal abuse; false allegations are levelled against them; and they are even denied their legal and political rights.

The review findings reveal that discrimination and exclusion starts from family. It includes estrangement from family and friendship networks, harassment at school, mental ill-health and homelessness. Rejection from families lead them to begging and sex work to earn a living. There is a 25% higher rate of suicidal attempts by transgenders compared to that in the general population. Discrimination in employment is also high-ranging from 20% to 57% - including being fired, denied a promotion or harassed.

Condom use is restricted with intimate partners and with clients due to difficulty in disclosing their other relations and fear of loss of clients. No wonder HIV prevalence is high among the group, but there are challenges in HIV testing as they experience discriminatory attitudes from the healthcare workers. While there is an increasing demand for gender affirming surgeries, most of them undergo sex reassignment surgery without proper counselling or preparation. Also a large proportion (57%) of them want to undergo a sex reassignment surgery but are unable to afford it.

- Young women selected in police force got dismissed after a routine medical examination in Tamil Nadu and Maharashtra.

- Santhi Sundarajan won the silver medal at the 2006 Asian games in Doha. Her medal was taken back, and humiliations led to a suicidal attempt. Later she won her battle and the state government compensated her.

- Air India rejected the application of a transgender engineering graduate for the post of a cabin crew though she was eligible for the job.

A study conducted by the National Human Rights Commission shows that transgender people are the subject of entrenched discrimination and isolation, while also facing an identity crisis in a 'gender-specific India' in which public utilities such as PAN cards, security checks, and public bathrooms require gender identification. 99% of them have experienced social rejection on multiple occasions; 60% of them have never attended school, while 52% experienced harassment by school classmates and 15% experiencing it from their teachers, leading them to drop out of their studies; 96% of transgender people are denied jobs and forced to take low-paying or undignified work, such as such as begging and sex work, to earn their livelihood. The study also reveals that 57% of them want to undergo a sex reassignment surgery but are unable to afford it.

what can be done?
Having favourable laws for the transgender community is important. But more important is ensuring their proper implementation. We must take a cue from international practices to end discrimination against transgenders. Countries like Thailand, Malaysia and Indonesia recognise their right to work. Even Pakistan has a certain quota of government jobs reserved for them.

Family support is very much needed for the children who experience gender conflict at adolescence. Familial acceptance, along with providing them with education, is the first important step in the process of mainstreaming them. Education plays a very important role in the life building of a transgender person, says Sobo Malik, a transgender woman from Pakistan who is a Chartered Accountant and the Administrative Head of Khawaja Sira Society. They face stigma and discrimination from a very early age, especially during teenage in the school. That is where they often get kicked off from the system or drop out from the school because of discriminatory treatment from other students or even from a teacher. Identifying them in schools, providing them free education, and giving them support (including psychosocial support) to continue education to higher levels will go a long way in not only better employment opportunities for them, but also being treated just like any other person.

More concrete and culturally sensitive education has to be developed for the general public about people who are disadvantaged because of their gender identities, gender expressions or sexual orientations. We must ensure proper implementation of the welfare measures, making available to them the schemes by the government or other agencies. And above all increase community awareness to stand up for their rights; for the public healthcare service providers to be more sensitive and aware of the issues; and for activists, civil society and the government to join hands to ensure gender equality and human rights for all.

And as Sister Moriarty had so firmly believed, let our gender identities, gender expressions or sexual orientations, not become the sole criterion of judging our worth as a human being. Discrimination is the anti-thesis of equality, and it is the duty of all right minded citizens to drive away discriminatory practices from all walks of life.

Let us aim for a future in which we all live in a society where all individuals could decide and act freely, regardless of their gender identities, gender expressions and sexual orientations.