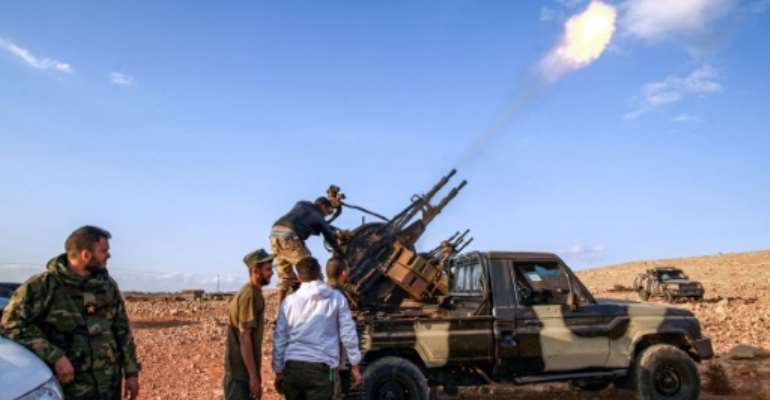 Libyan fighters loyal to eastern strongman Khalifa Haftar fire guns during a funeral of a comrade in November 1, 2020; Haftar has urged his troops 'drive out' Turkish forces. By Abdullah DOMA (AFP)

Eastern Libyan strongman Khalifa Haftar has called on his fighters to "drive out" Turkish forces backing the UN-recognised government, as talks drag on to end long-running war in the oil-rich nation.

"There will be no peace in the presence of a coloniser on our land," Haftar said, in a speech to mark Libya's 69th anniversary of its independence on Thursday.

"We will therefore take up arms again to fashion our peace with our own hands... and, since Turkey rejects peace and opts for war, prepare to drive out the occupier by faith, will and weapons," Haftar said.

Libya was thrown into chaos after a 2011 NATO-backed uprising toppled and led to the killing of long-time dictator Moamer Kadhafi.

Wracked by violence since then, the North African country has become a battleground for tribal militias, jihadists and mercenaries and a major gateway for desperate migrants bound for Europe.

Two rival camps now vie for power, with Khaftar's eastern-based administration pitted against the Tripoli-based Government of National Accord (GNA), recognised by the United Nations and backed by Ankara.

Turkey's help with military advisers, materiel and mercenaries helped the GNA push back Haftar's forces from the gates of Tripoli earlier this year.

Haftar, who is backed by Egypt, the United Arab Emirates and Russia, spoke after Ankara's parliament this week adopted a motion extending the deployment of soldiers in Libya by 18 months.

"Officers and soldiers, get ready", Haftar said Thursday, calling out to hundreds of soldiers on parade in a military barracks in the eastern port city of Benghazi.

At the same time, the GNA-head in Tripoli, Fayez al-Sarraj, called on Libyans to "turn the page on disagreements to achieve stability".

This will only happen through "solidarity between political forces", he said. 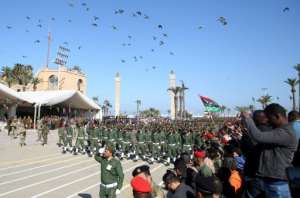 In the Libyan capital Tripoli, under the control of the Turkish-backed Government of National Accord (GNA), soldiers opposed to Haftar marched on Thursday to mark Libya's 69th anniversary of its independence. By Mahmud TURKIA (AFP)

A ceasefire signed in October under the aegis of the UN, and generally respected, has allowed the rival parties to return to the negotiating table.

Sarraj said elections slated for December 24, 2021 were a "historic opportunity that should not be missed".

But analysts were less optimistic and warned of tough challenges ahead.

"The October 23 ceasefire agreement silenced the guns, but otherwise is a dead letter: both sides have backtracked on fulfilling its terms and instead continue to build up their military forces," the International Crisis Group (ICG) said.

"Neither side appears keen to implement its commitments and both seem determined to dig in further."