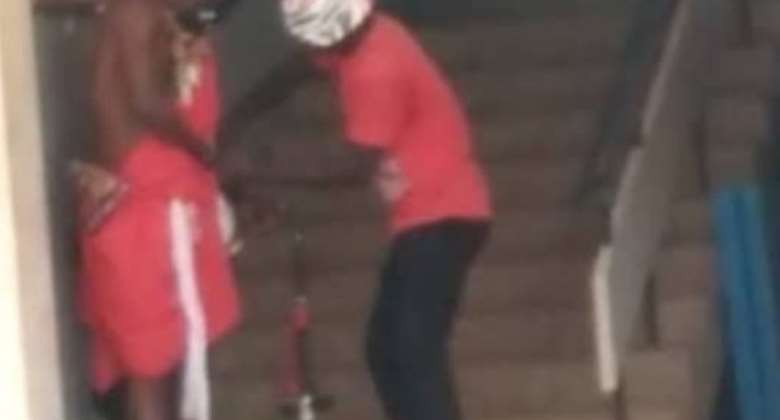 An alleged Jujuman and his accomplice scaled the walls of the Volta Regional Directorate of the Electoral Commission to post the opposition National Democratic Congress (NDC) petition in Ho after the group staged a three-hour demonstration through the principal streets demanding a change in the verdict of the December 7 polls results.

The duo, contrary to the agreed designated number of party leaders, who were supposed to present their petition to the EC Officials, got to the premises only to meet a locked gate.

The duo, who were not part of the designated five, then scaled the wall and began to do enchantment, pouring some powdery substances and invoking words to the chagrin of the Police officials, who were outside the EC's premises, protecting lives and property.

Another drama was the slaughtering of ram at the main gate of the EC, Ho office, with the blood sprinkled across the gate and in a circular direction targeted at invoking certain spiritual action against the EC.

Chief Superintendent of Police, Mr Jessey Opare, Volta Regional Operational Commander described the act of the duo as unlawful entry and said appropriate action would be taken on them.

He said the Command decided not to undertake any “premature arrests” at the event grounds as that could lead to chaos.

He however said the Police would invite the organisers of the protests to assist in their next action.

Mr Opare explained that the Command received notification from the NDC regarding the demonstration and had given permission but with a condition that only five of party Executives of the Party would be allowed into the premises of the EC to present their petition.

He said the five could not perform the task as EC officials were on break.

The teeming group alleged the EC stole the verdict from the flagbearer of the NDC to President Akufo-Addo.

The supporters clad in red chanted “No Mahama, No peace” with placards inscriptions reading, “This is naked thievery,” “You are a dent on our democracy,” “You can still everything, no our votes,” “Speak up international community,” “Declare Mahama now.”

Meanwhile, Mr Henry Ametefee, Regional Chairman of NDC said the NDC would not allow the sovereign will of the people to be undermined.

He said the NDC would not accept the results as declared by the EC because the results were fraudulent and inaccurate.

He commended the media and the police for showing professionalism in protecting the protesters.