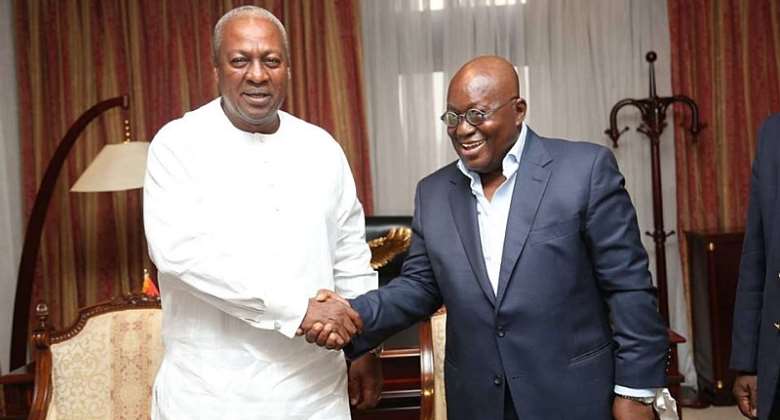 Fellow Ghanaians, alas, we have found a new and very convenient way of tackling corruption in this country. We no longer need a plethora of promises by politicians to come and fight the menace that has remained albatross around our neck since independence if we give them the nod.

It is obvious the ruling government does not want to leave power not because of the "juice of governance" they have been enjoying in the last four years, but because of the atrocities, in terms of financial malfeasances, they have committed, and fear of being put behind the bus if they lose this election. And strictly speaking, Akufo Addo and his boys have a huge skeletons in their wardrobe.

It has exposed the legendary corruption of the NPP-government that must be awarded both gold and silver medals. And every patriotic Ghanaian who has Ghana at heart must rise to put an abrupt end to this incessant depletion of our resources under the stewardship of President Akufo Addo, in this election.

The corruption Perception Index keeps skyrocketing, domestically. Our anti-corruption Mosses, as the former Special Prosecutor depicts president Akufo Addo, has failed woefully and has become a rather anti-corruption Pharaoh with the most shambolic fight against corruption in this country. And we can choose, in our collective idiocy or vigilance, to get corrupt Akufo Addo punished by the next new government or we allow them to constitutionally protect themselves after another four years.

Fellow Ghanaians, we can no longer afford to have the president of our dear Republic residing “in the pockets” of his cronies who keep mortgaging our welfare through corrupt activities; we can no longer have a president who “takes fat brown envelopes” for their personal greed.

Akufo Addo and his gigantic government has borrowed GHC10,000 per every Ghanaian; more than thrice what former president Mahama borrowed in four years. Please Akufo Addo does not need another four years, let him account to Ghanaians. Yes. President Mahama was not also a saint, indeed, but after four years we have come to realize he was indeed innocent because the government could not prosecute him.

Fellow Ghanaians, the slideshow and PowerPoint presentation of corruption scandals under the watch of Akufo Addo cannot be hearsays: let us give president Mahama the opportunity also to prove Akufo Addo innocence or guilt.

The reality is, corruption and nepotism, since time immemorial, have been more bedfellows than the Akufo Addo-led government and the current Electoral Commission. No saner government that has genuine intention to actually protect the National Purse would institutionalize the practice of nepotism like Akufo Addo has done.

Let's give president Mahama the chance to investigate BOST, PDS, AGYAPA, missing Gallamsey Excavators, how 2 million cedis was spent on food daily during the height of the Covid-19 pandermic.

In fact, nepotism does not only help to legitimize corruption; it is the fuel of injustice in any government. And let me elaborate. While the likes of Hon. Boakye Agyaku, who are not directly related to the president were unceremoniously dismissed with joy and alacrity for attempting to negotiate our better future through shady deals in the Ameri Deal among others, the president’s cousin who has been caught neck-deep in the Agyapa Royalties Deal, is still being called an Honorable Minister! The fact is, the Agyapa Royalties Deal does not only involve the Honorable Finance Ministe, the president’s cousin, alone. Our elders say when the long mouth of the dog is insulted, the alligator in the river is affected. Some most “powerful toes” in the presidency would have been stepped upon if the case was pursued to its logical conclusion.

Let's give president John Mahama the opportunity to find justice to the likes of Hon. Boakyi Argyaku. Let a new government come to find out how did the office of the Special Prosecutor was defunded yet there were allocations of cash from the national kitty to his office he never received. Where is the money?

EDUCATION: President Mahama has made a promise to absorbing freshmen’s fees at the university level if we give him the nod again to govern. As expected, the government in a visible panic mode about this hefty promise by the former president, has decided to take him to the cleaners bastardizing him for making that promise because they claim he did not believe in Free SHS policy. The former Communication Director of the governing party, Nana Akomea, has even asked a rather rhetorical question, “was it not Mahama who did not believe in Free Senior High School (SHS) implementation?”

It is true that president Mahama did not believe in the VERSION of Free SHS implementation by the NPP, because he believed it did not worth it to burn down a house to get rid of a rat: why would you borrow money which payment would be due in say, five years’ time, to be invested in Mahogany plantation? How long does it take a Mahogany tree to be matured? It may be an investment all right, but does it make sense to do that?

That was one of the basic reasons why president Mahama rolled out the rather Progressive version of the Free SHS in 2015 where some aspect of fees was taken care of by his government at the SHS level. However, the NPP decided to borrow money to make it plausible to implement their version of Free SHS where both unqualified and qualified candidates are allowed to go, without infrastructure.

Fellow Ghanaians, if governance is merely about borrowing money in the name of citizens in order to undertake shoddy projects for purposes of kickbacks, who cannot be president, even president for life and not just four more years? We need a president who can get his scale of preference right!

Regarding security, every Ghanaian can attest to the fact that Ghana has literally become an "Abattoir" in the last four years under president Akufo Addo where journalists, lawyers, and even lawmakers, have been slaughtered in a broad daylight, and some in the dead of the night. Majority have been maimed and the government had only issued white papers to place the perpetrators of such heinous crimes above the reach of the law. Barefaced and condescending display of arrogance of power has been a pastime in this NPP government!

Fellow Ghanaians, if the prime purpose of every government is to safeguard the security of its citizens, jealously, let’s ask ourselves: does president Akufo Addo and his most corrupt and dangerous than fake contraceptives, deserve another four years?

We were all in this country when the NPP lambasted the Mahama-led government for borrowing too much; and said to us, that we were sitting on wealth and did not need to borrow, and that it amounted to incompetence on the part of president Mahama to have borrowed 40 billion cedis in four years to govern. Fellow Ghanaians, what does it amount to if the NPP has ballooned our public debt by additional 173 billion in less than one term of office? Hypocrisy or incompetence? We must not allow this to continue!

Fellow Ghanaians, this election, without gainsay, is of crucial importance to us as a people and we must not miss the delicate opportunity to make the right choice. Our lives as citizens and not immigrants in our own land, from now onwards, shall be determined by who we decide to elect, in our unanimous stupidity or wisdom, as our president. Our lives, as not slaves in our own land but free men and women, post this election, shall be decided by the person we choose to lead us.

Who becomes our next president on December 7, shall determine whether we have a brighter and better future, or we shall become and remain a failing state, at least, in the next century! Let's unchain ourselves from this political theft and "vulturism".

It is obvious that many Ghanaians are fed-up of the two major parties. And some have even decided to sit on the fence in this year’s election with hands akimbo to participate at all because, “all politicians are the same” they argue. But it is not entirely true. I admonish them with the words of Plato when he said that, "the punishment which the wise suffer who refuse to take part in the government, is, to live under the government of worse men.” This is a rescue mission to quote president Mahama.

Just as our fingers are not equal in size, the mismanagement, corruption, incompetence and nepotism of politicians are unequal as well. I mean, politicians are certainly better than one another. They all may want to govern because of our collective treasury, but not all of them will use in-your-face foul means to pilfering it! There are those of them who would do the right and necessary things in order to siphoning our cash, and there are those of them who will do just anything, even against our very survival, to plundering us dry.

This is the single most important difference among politicians: a quality we must consider deciding who should become our next president.

In early 2018, I was to undertake a project to be debriefed to my benefactors the MasterCard Foundation in partial fulfilment of our obligation to giving back to communities, life-touching projects. I identified a nice project on road safety that required the endorsement and approval of the Mayor of Tamale, Hon. Iddrisu Musah Superior before it could commerce. As a constant and staunchest critique of his government, I had to lie that I had been criticizing the government for attention when I realized the young men around him identified me. Which he was convinced anyway because I later created What's up chats with the vice president to shown him as evidence. However, he dismissed my project that could benefit the good people of Tamale and Ghanaians at large not because I was criticizing his government, but because it will cost Akufo Addo votes in 2020! That was what the best Mayor in Africa told me.

Fellow Ghanaians, is it not time we rise above tribal jingoism and elect candidates who are truthful to us and care for our collective good as a people? For how long are we going to allow president Akufo Addo and his counterfeit economic prophet Dr. Mahamoudu Bawumia to keep insulting our commonsense in this country?

Fellow Ghanaians, in this election, it is not about how many students are benefitting from so-called Free Senior High School, but how much does it cost each Ghanaian to have it implemented and whether that should call for the reelection of Akufo Addo or not, sincerely and honestly?

Fellow Ghanaians, the razzmatazz, slogans, about so-called projects and policies of the NPP have nothing to do with our well-being, it is for create-loot-and-share - kickbacks!

Fellow Ghanaians, there is no smoke without fire: Let a new government investigate all the corruption allegations level against the NPP government; Let all the 127 ministers be investigated!

May God save our dear country from ATM politicians.

Abdul Hakeem Iddrisu is a Youth Activist and Counsellor.