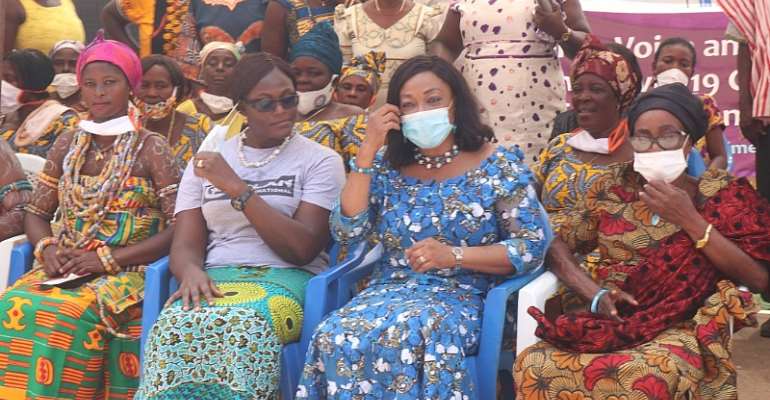 Some participants at a Community Sensitization Durbar organised by the Henry Djaba Memorial Foundation held at Somanya in the Yilo Krobo District of the Eastern Region have shared their bitter experiences on how COVID-19 affected their lives and businesses in spite of the measures put in place by Government and other organisations to reduce its effect.

The people claimed their lives and businesses were heavily affected because they did not have much information about how they could contain the spread of the disease, which therefore limited them in most of their endeavours.

According to them, even though they were aware of some of the basic COVID-19 safety protocols, majority of them were actually naïve about the practical and proper way of washing their hands with soap under running water, how to wear face masks and how to use hand sanitizers among others to protect themselves and other people around them.

Ghana is currently fighting hard to avoid a possible second wave of the COVID-19 following a speedy rise in the number of new confirmed cases across the nation. The country now has 50,874 confirmed cases, 49,405 recoveries, 157 new cases, 1,270 active cases and over 320 deaths as of 22nd November, 2020.

Against this backdrop, the Henry Djaba Memorial Foundation in partnership with the Global Affairs Canada through Plan International Ghana Women’s Voice and Leadership programme and with funding from the Canada Fund (Government of Canada) held series of community durbars at Somanya in the Yilo Krobo District of the Eastern Region to sensitize the people.

It was aimed at increasing awareness and knowledge on how to properly apply the safety protocols to avoid the spread of the deadly COVID-19 pandemic especially among the vulnerable groups.

Most of the participants during open interactions shared diverse experiences on how their lives were affected by the pandemic.

Mr. Emmanuel Teye Opata, a person with disability said that he and his colleagues suffered many challenges since majority of them did not have any form of employment or business to sustain them in difficult times like this.

“Some of us even locked ourselves and families down voluntarily before the lockdown was announced by the President…because we wanted to avoid getting in contact with people especially strangers. We couldn’t go out to look for support any longer".

He said it took the intervention of few friends and relatives to survive aside the little support they received from the government.

Madam Beatrice Osei, a market woman in Somanya who hailed the Henry Djaba Memorial Foundation for the training said that at the initial stages of the COVID-19, the Government through the District Assembly came into the communities to educate people on the safety protocols, but they were not thought on how to practically apply the measures to avoid the spread of the disease as compared to what they were taught by the Foundation.

She said the Community Sensitization durbar by the Henry Djaba Memorial Foundation, had really gave them practical information and insight on the safety protocols and a deeper understanding of how they could win the fight against the COVID-19.

Madam Beatrice Osei revealed that the training had helped them to know that they had a duty to protect themselves as individuals and other citizens who would come in contact with them especially persons with disability, children and other vulnerable groups.

“We learnt that we should avoid spitting or sneezing in open places, avoid disposing used face masks and used tissue papers that could put other people like children and persons with disability who crawl with their bare hands at risk of contracting the disease.”

The participants were taken through several topics such as: breaking the ignorance, myths and misconceptions on COVID-19; behavior and attitude change to encourage compliance with CoVID-19 safety protocols; and healthy lifestyle and information sharing among others.

The training was climaxed with the airing of the “Let’s Talk Ability” TV show by the Henry Djaba Memorial Foundation so that the lessons learnt and information shared could be disseminated to other people across the 16 regions of Ghana.