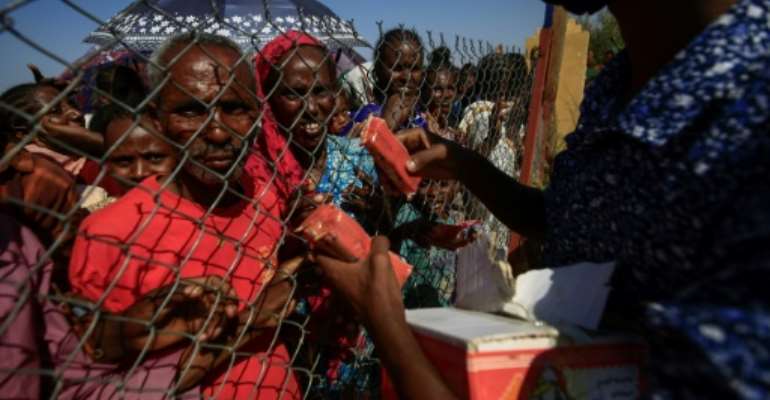 At a sprawling refugee reception centre in Sudan, Ethiopians who fled the deadly Tigray conflict queued haphazardly outside a school-turned-relief facility to receive handouts of food, water and clothing.

"I escaped in these clothes and have been in them since I arrived," Babosh Alamshed told AFP on Friday, pointing to his stained red T-shirt and worn-out black trousers.

"The war did this to us. We are starving. The help we receive is close to nothing," said the 21-year-old, who arrived in Sudan's "Village 8" transit camp two weeks ago, after a three-day trek.

Ethiopia's northern Tigray region has been rocked by bloody fighting since November 4, when Ethiopian Prime Minister Abiy Ahmed announced the launch of military operations there.

The ongoing conflict is reported to have killed hundreds of people and forced thousands more to flee into neighbouring Sudan.

On Friday morning, Alamshed took his place in a long queue outside the aid facility to receive clothes, soap and other basic items.

Ethiopians frustrated by the wait and the sweltering heat jostled to enter, as a couple of Sudanese security forces standing guard tried to shoo them away with sticks.

Hours later, refugees broke through the metal gates and rushed to compete for handouts.

Neighbouring Sudan, itself suffering from a severe economic crisis, was caught off-guard when the conflict broke out earlier this month.

Many Ethiopian refugees said they had left with just the clothes on their backs. By ASHRAF SHAZLY (AFP)

It now hosts some 36,000 Ethiopians, with many in transit camps near the border, according to Sudan's refugee commission.

Many at "Village 8" said they had left behind modest lives as farmers with just the clothes on their backs to escape intense bombings, shootings and knife attacks in Tigray.

Family members and relatives were left behind, their fate unknown, they said.

"But the numbers keep growing by the day," he added.

That has prompted an aid drive from Khartoum and other parts of Sudan.

Large bags of sorghum, salt and oil bottles have been brought to "Village 8" for distribution to the refugees, but the supplies are limited.

"We are very short on resources."

The UN is expecting that up to 200,000 Ethiopian could flee the unrest over the next six months, and its World Food Programme said it needs $24.6 million to meet their immediate needs in Sudan.

Inside the aid facility, mothers carrying crying babies on their backs pushed their way through the crowd to find warm clothes for the children.

Other Ethiopians crouched on the ground as they waited to receive assistance.

"We are looking for food, water, clothes, anything for our children. Have you seen how cold it gets here at night? It gets unbearably cold," said Abarash Harago, a mother of five.

Three young men fought over a pair of trousers, while a disabled man using walking sticks fell to the ground as he tried to get some clothes.

Away from the mayhem of the facility, listless refugees slept on tattered rugs or on the muddy ground inside small, cramped brick shelters.

There is no running water and few bathrooms, forcing most to urinate and defecate in the surrounding grassland.

A group of women and children desperate for water punctured a pipe to a nearby mosque in order to quench their thirst and wash.

"It's like we are animals around here," refugee Adam Mahmoud said.

Ethiopian medics said that several women among the refugees were due to give birth soon.

"We knew refugees were coming to Sudan but we did not imagine it to be that way," Tesfay said, pointing towards children who were separated from their families during the trek from Ethiopia.

"The crisis is just beyond what words can describe."