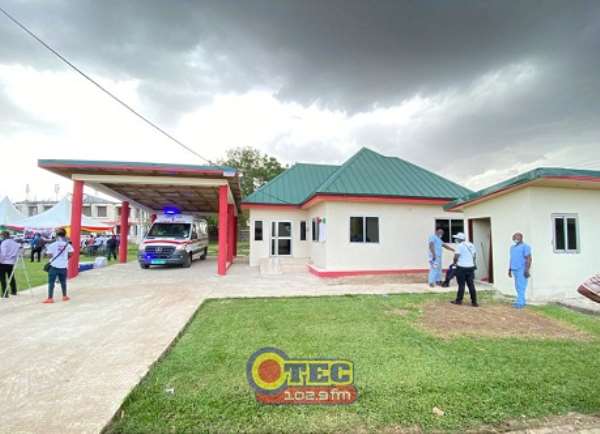 Member of Parliament (MP) for Manhyia South constituency in the Ashanti Region, Hon. Dr Matthew Opoku Prempeh has constructed an ultra-modern Ambulance Bay for the safe-keeping of an ambulance donated by government.

This, according to the legislator, will significantly improve the provision of critical life-saving healthcare for seriously-ill patients in the Kumasi metropolis

Situated in the premises of Manhyia Government Hospital, the ambulance bay, which boasts of modern amenities, would be serving as the station for the paramedic crew.

Dr. Matthew Opoku Prempeh, who doubles as the Education Minister, in his address during the handing over ceremony on Tuesday, November 17, 2020, said he valued the life of his constituents so he would readily provide key amenities to boost their health.

Napo, in justifying his decision to build the ambulance bay pointed out that the facility would greatly benefit his constituents.

“Ambulance play a crucial role as first responders in providing critical life-saving intervention when required in our communities”, he said.

Napo, who is also a Medical Doctor, called for high maintenance culture of the facility, saying “It is my hope that this bay will be well maintained for the sustainability of quality healthcare delivery”.

The Metropolitan Chief Executive (MCE) of Kumasi Metropolitan Assembly (KMA) Boss, Osei Assibey-Antwi, on his part, described Napo as a “God-sent leader for Manhyia South”, enumerating the MPs roles in developing the constituency.

According to him, Manhyia South has benefitted from school buildings, roads, health projects, water and sanitation, due to Napo’s visionary leadership style.

In a related development, Napo has also donated 20 brand new hospital beds to the Manhyia Government Hospital to help in the provision of quality healthcare to patients.