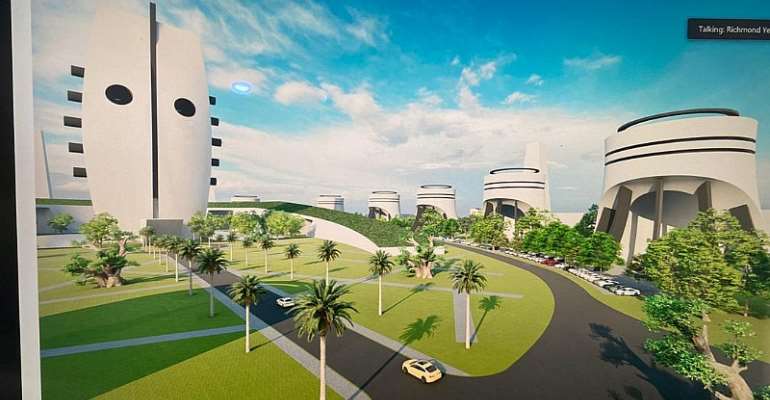 The 'Wakanda City of Return Project' has been launched at a colourful ceremony at the Cape Coast Technical University Conference Room.

The project which is set to be a legacy project of the government's 'Year of Return' and 'Beyond the Return' tourism initiatives. It is expected to give birth to the construction of residential, tourism and other facilities in the central regional capital, Cape Coast.

Speaking at the launch, the Mayor of Cape Coast, Hon. Ernest Arthur expressed his appreciation to African Diaspora Development Institute (ADDI), Pelicape Limited and Adepa Africa Investments for accepting the Assembly's proposal to undertake the 'Wakanda City of Return' Project.

The 'Wakanda City of Return Project' is a joint partnership between the Cape Coast Metropolitan Assembly, ADDI, Pelicape Limited and Adepa Africa Investments.

The ultramodern edifice modelled around the architecture of the 'Wakanda City' as exhibited in the famous 'Black Panther' movie is expected to attract many across the globe to Ghana. It will also be a centre for teaching the history of the black race.

The 'Wakanda City of Return' will indeed cause the coastlines of Cape Coast to witness the construction of 5 -Star hotels, heritage walkway, retreat and health resort, conference centres and the continental corporate headquarters of African Diaspora Development Institute (ADDI).

The Partners add that the project will indeed be a sound arena for leveraging on the heritage and cultural tourism assets of Cape Coast in creating a definite place of pilgrimage for people of African descent to know the history, culture and civilisation of Africa as well as the continent's role in creating a new world economy and order.

Addressing the gathering during the launch, the paramount Chief of Cape Coast, Osabarima Kwesi Atta II, who was also the Chairman of the event lauded the initiative of the Assembly and its partners and pledged his commitment in making the project a success.

He indicated that the project which will be built on the coastlines of Cape Coast should be used to correct the negative script about Cape Coast and Ghana as a whole in terms of development.

He added that the ultramodern city should be able to tell the world that Ghana is not only rich in tourism potentials but is also rich in terms of the mental capacity to do great things.

The Vice Chancellor of the Cape Coast Technical University, Rev. Ing. Prof. Joshua Danso Owusu-Sekyere also pledged the readiness of the University to partner the investors in making the project a success as the project will not only add to the tourism potentials in the area but will also attract more investors into the area.

On funding for the project, Dr. Kojo Taylor, Chairman of the 'Wakanda City of Return', who is also a partner of Sanford Clinics, Ghana noted that the partners are on course in raising the needed funds to build the city.

He thus discounted suggestions that the project is going to be one of the promises which were never fulfilled.

"I have been involved in so many projects including Sanford Clinics and raising money for this project is not going to be difficult. We are going to give the public monthly or quarterly updates so that they know what we are doing", he added.

Her Excellency Ambassador Arikana Chihombori-Quao, a former African Union Representative to the United States and the President of ADDI praised Hon. Ernest Arthur, the Mayor of Cape Coast for his commitment in ensuring that this project comes to a realisation.

She disclosed her readiness to mobilise funds for the construction to begin as soon as possible.

The Chief Executive Officer of Adepa Africa Investments and Apagyahen of Asebu Traditional Area, Nana Obokese Ampah I underscored the need to come together as a people to push this great vision.

According to him, the support of the people of Cape Coast is needed to bring this dream into realisation.