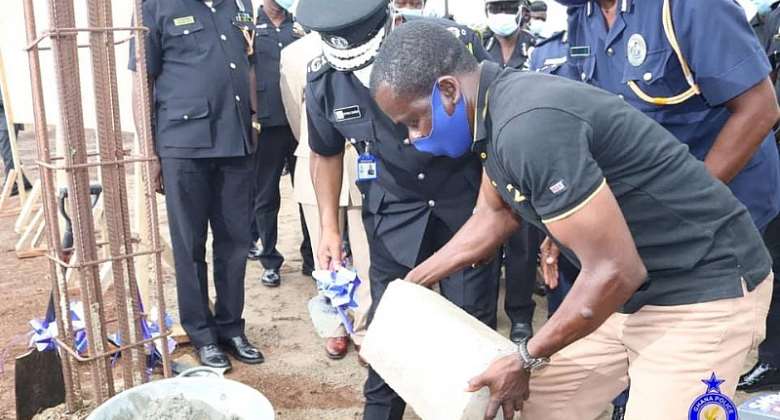 The Inspector General of Police (IGP), James Oppong-Boanuh at a ceremony in the Ashanti Regional capital Kumasi has laid the foundation stone for the construction of a police hospital in the region.

The 50-bed capacity hospital is to serve the health needs of Police Officers, their families and others in the northern sector of the country.

The IGP in his keynote address said, the two-storey hospital facility which is estimated to cost GHS 8.3 million upon completion will ease the pressure on the Police Hospital in Accra and will reduce the tendency of transporting suspects as well as criminals in custody to other hospitals in and around the Kumasi metropolis.

He also used the occasion to commend COP Kofi Boakye who initiated the project when he was the Ashanti Regional Police Commander and the Police Welfare Scheme Steering Committee for suggesting to the Police Administration to use interest on investment from officers welfare contributions to finance the project.

“I also want to re-assure all, that Police and Security Services are committed to maintaining law and order before, during and after the Presidential and Parliamentary Elections on 7th December 2020”, he added.

The Ghana Police Hospital in Accra was established in 1976.

Covid-19: Headache, body pains show the vaccine is working i...
20 minutes ago