By Patrick Fort and Patrick Markey 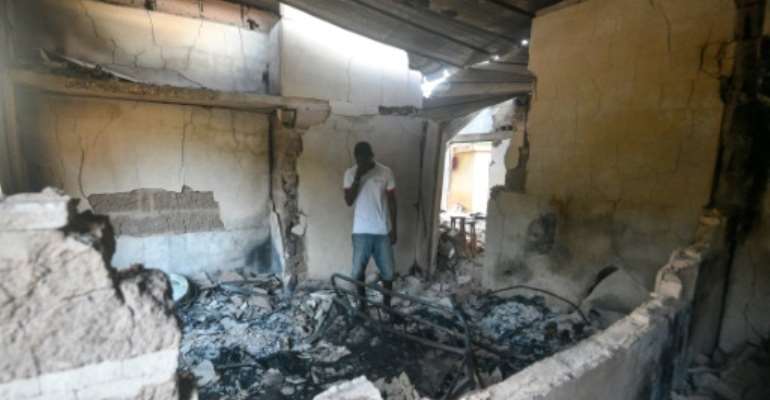 Toumodi, in central Ivory Coast, was one of the towns hit by violence over the election. By SIA KAMBOU (AFP)

Two Ivory Coast government supporters were killed and a minister's convoy hit by gunfire, officials said on Wednesday, with the country in a deadlock over President Alassane Ouattara's contested reelection.

Ivory Coast is mired in a post-vote crisis after Ouattara was declared victor on Tuesday, but opponents announced they would form a rival "transitional" government after boycotting the election.

Security forces have surrounded the homes of Ouattara's chief rivals, Henri Konan Bedie and Pascal Affi N'Guessan, after officials accused the opposition of plotting against the government.

Opponents say Ouattara's third term breaches the country's two-term presidential limit in an "electoral coup", but the Ivorian leader contends that a 2016 reform allowed him to run again by resetting term limits.

The United States on Wednesday joined the UN in calling for dialogue in the West African state where more than 40 people have been killed in clashes over Ouattara's third term since he announced he would run again in August.

Two government supporters were killed in a clash near equipment minister Amede Koffi Kouakou's home in the central town of Toumodi, a ruling party official said.

Toure also said the convoy of communication minister and government spokesman Sidi Tiemoko Toure had come under fire in the centre of the country, but there were no casualties.

The crisis has revived fears Ivory Coast could slide into the kind of violence that killed 3,000 people a decade ago when then president Laurent Gbagbo refused to accept defeat by Ouattara.

Most clashes over the election were between local ethnic groups allied with opposition and Diaola communities from the north seen as close to Ouattara, a Muslim from the northern region.

Police fired tear gas on Tuesday to clear small groups of protesters near Bedie's residence in Abidjan's Cocody district, where security forces are still blocking roads around his home.

"Stay mobilised for the love of the reconciled Ivory Coast, for the return of peace and against this autocratic regime trampling the constitution," Bedie said in a tweet.

A cyclist reads a sign on a burnt truck calling for violence to stop in the market of Toumodi. By SIA KAMBOU (AFP)

Ruling RHDP party officials say the government was always open to negotiation, but it had to stop attempts to destabilise the country with calls for a parallel state.

"Imagine if these opponents had been wearing military uniforms, it would have been called a coup," one party official said. "The government had to react."

The crisis is another test for a region where Guinea is caught up in its own post-election dispute, Nigeria is emerging from widespread unrest and Mali has a transition government following a coup.

France on Wednesday urged the rival factions in Ivory Coast to stop what it said were provocations and "acts of intimidation".

The United States, meanwhile, called on Ivorian leaders to respect the democratic process.

"Grievances related to the presidential election must be resolved in a peaceful and transparent manner within the framework of the law," a statement from the US embassy said on Wednesday.

The United Nations, African Union and African bloc ECOWAS on Tuesday called on the opposition to "respect constitutional order" and seek dialogue, while urging restraint from all sides.

Western and African governments are pressing the opposition to abandon its idea of a transitional government and for Ouattara to "appease rather than oppress", a diplomatic source said.

In power for 10 years, Ouattara said earlier this year that after his second term he planned to make way for a new generation.

The sudden death of his chosen successor in July prompted him to seek a third term.

The anger sparked by his decision has revived memories of past Ivorian feuds with roots in a 2002 civil war that split the country in two, the north held by rebels and the south by forces of Gbagbo.