A cynosure of vehement oratory: Sir, pardon not only galamseyers, add armed robbers! 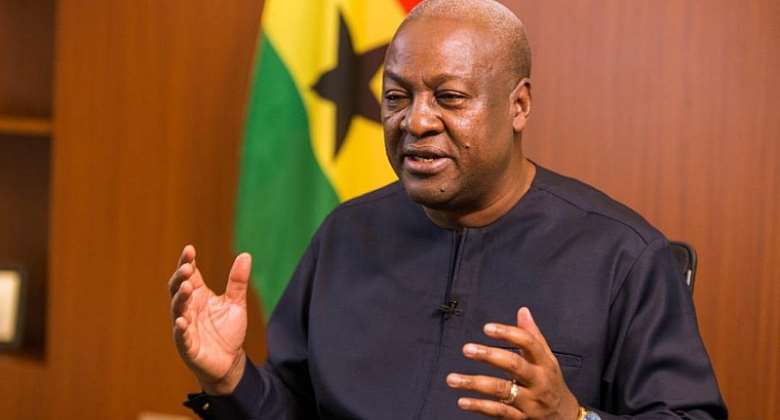 Some of us were taken aback listening to former President Mahama lamenting over the jailed galamseyers and evocatively promising to pardon the wrongdoers who have been rightly convicted and sentenced to prison by a competent court of jurisdiction.

Well, if the former president has a consuming desire to pardon convicted illegal miners so as to restart their lives, he might as well free other criminals such as armed robbers, prostitutes, the goat thieves, plantain, mobile phone, cassava thieves, amongst others. After all, what’s good for the goose is good for the gander.

It is quite amazing to see no less a person than a former president of the land, who out of desperation to gain electoral advantage, unabashedly downplaying the menace of illegal mining.

If we are happy to send the goat, plantain, mobile phone and cassava thieves to the penitentiary, how much more the illegal miners who are bent on stealing our mineral resources, destroying the water bodies and degrading the environment?

Suffice it to stress that in addition to stealing our natural resources, the illegal miners are gleefully polluting our sources of drinking water with noxious mercury and cyanide.

“Unlike some other West African countries, Ghana allows mercury use in mining. Mercury is freely available in shops and can be bought with a canister, bottle, or as a ball wrapped in a plastic cling film, and much of it has been brought in by Chinese miners (HRW 2014).”

According to the World Health Organisation (WHO), exposure to mercury – even small amounts – may cause serious health problems, and is a threat to the development of the child in utero and early in life (WHO 2017).

What is more, WHO insists that mercury may have toxic effects on the nervous, digestive and immune systems, and on lungs, kidneys, skin and eyes.

More so, mercury is considered by WHO as one of the top ten chemicals or groups of chemicals of major public health concern (WHO 2017).

WHO explains that people are mainly exposed to methylmercury, an organic compound, when they eat fish and shellfish that contain the compound.

Moreover, WHO suggests that the primary health effect of methylmercury is impaired neurological development.

Given the extreme dangers associated with illegal mining, it is, indeed, a step in the right direction for President Akufo-Addo to halt the illegal miners, many of whom are said to have been using noxious mercury in their mining activities.

If you may recall, when the recalcitrant illegal miners were all over the place stealing our mineral resources, terrorising the indigenes and at the same time destroying the lands and water bodies and President Akufo-Addo decided to place a ban on their activities, no less a person than former President Mahama bizarrely came out to oppose the NPP government’s commendable efforts to curb the illegal activities (See: Stop chasing illegal miners with soldiers – Mahama to government;citinewsroom.com/ghanaweb.com, 28/04/2018).

Ex-President Mahama was reported to have grouched somewhat plangently: “…it is true that if we don’t do something about it, it will destroy the environment. But we need to apply wisdom. Because we’ve chased young people involved in illegal small-scale mining with soldiers in the past in this country but it didn’t work.”

Former President Mahama was said to have shockingly pontificated: “But if we put a blanket ban and send soldiers after the young people that is not the way to go. As you stop illegal small-scale mining, at the same time you must put in place a livelihood package so that as you are displacing people from illegal mining, they have something to do…. But when there is nothing to do but you are just chasing them, shooting them, it is not the way to go.”

Deductively, Ex-President Mahama was suggesting that the security personnel should cease chasing armed robbers with guns and rather offer them alternative livelihoods. How bizarre?

In fact, there is an incontrovertible evidence of some galamseyers quitting their jobs and moving to the rural areas to embark on the illegal mining. A criminal shall remain so regardless.

It is, however, true that potential economic benefits (employment, tax revenues and development outcomes) can be derived from illegal mining in Ghana.

We cannot also deny the fact that illegal mining is a significant contributor to the economic and social well-being of many people and households in rural, remote, and poor communities in Ghana.

However, the negatives within the illegal mining outweigh the positives. The negative effects include, among other things, environmental degradation, water pollution, the release of mercury and other toxic and hazardous wastes into the free environment, and unforeseen social tensions that could lead to civil unrest.

In ending, given the preponderance of the negatives over the positives in the illegal mining, it is absolutely right for any serious, committed and forward-thinking leadership to place a ban on such activities and bring the offenders to book.