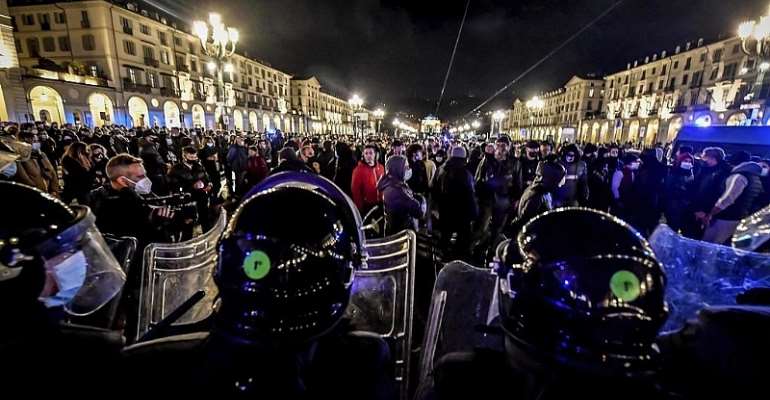 The Italian health ministry says the country registered a new record of daily Covid-19 infections at 21,994, adding that the daily death toll on Tuesday stood at 221. It was the first time Italy registered more than 200 fatalities in a single day since mid-May. The head of the Higher Health Institute, Silvio Brusaferro, said the incidence of Covid-19 is growing in Italy and the virus is present everywhere in the country.

Two of the most affected cities are Milan in the north and Naples in the south. Walter Ricciardi, health advisor to Health Minister Roberto Speranza, on Tuesday called for both cities to be put into lockdown. “In Milan and Naples, you can get Covid by walking into a bar or a restaurant or catching a bus," Ricciardi said.

"It is very easy to come into close contact with someone who is positive because the virus is circulating so much," he added.

The head of Lombardy's emergency wards, Guido Bertolini, called for a national lockdown. He said, “the situation is dramatic, not only in Lombardy but everywhere, at a national level”. For the time however the Governor of Lombardy Attilio Fontana resisted the call and said current measures were enough to prevent a full-blown lockdown.

The government implemented new strict nationwide restrictions this week in efforts to limit the rapidly rising numbers of Covid-19. The measures, which included the closure of many activities, including bars and restaurants from 6pm onwards, led to widespread protests in many Italian cities.

From north to south, in more than 15 cities, people took to the streets to show their discontent with the new restrictions. Hundreds of protesters ransacked stores, vandalized trams and set rubbish bins on fire.

Groups of young people in Milan threw glass bottles and stones and chanted "freedom, freedom". The tense climate reflects the widespread sentiment that many businesses will have to close for good if help is not forthcoming soon from the government.

Prime Minister Giuseppe Conte told Italians he was very aware “this is a complex moment as this is a pandemic that is harshly challenging us, causing anger, frustration and new inequalities. He said that compensation would be made available in record time for all those who would be penalized by the new restrictions. He warned everyone “to march together so as not to aggravate the situation”.

The Italian cabinet on Tuesday approved a package of measures worth over €5billion to support hundreds of thousands of businesses in the restaurant, food sports and entertainment sectors. The government said it would provide compensation to businesses by mid-November.

Since the start of the outbreak in Italy, a total 37,700 people have died because of coronavirus.