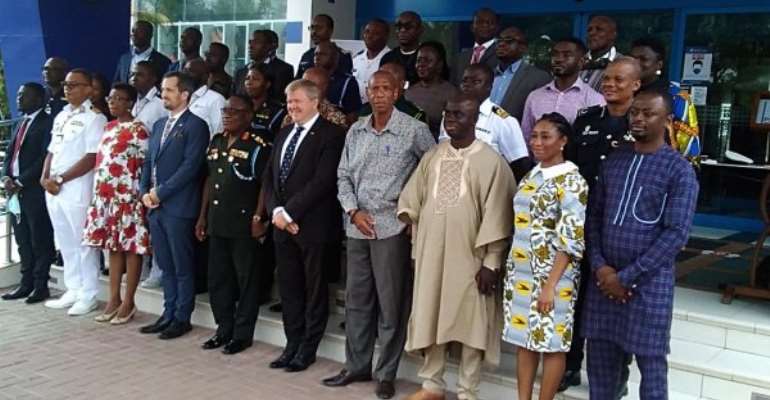 He said sustainable development of the blue economy, improvement of the well-being of coastal communities and commitment and collaboration across agencies and governments were key in reducing maritime insecurity in the Gulf of Guinea.

Commandant Ofori said this at the opening of a two-week pilot course, dubbed “Developing Maritime Security Culture in the Gulf of Guinea” for security Agencies and other stakeholders in the maritime security sector in Takoradi.

The training workshop organized by the Kofi Annan International Peacekeeping Training Centre in partnership with the Government of Denmark was attended by more than 25 participants drawn from the Navy, Judiciary, Marine Police, Fisheries Commission, Private shipping companies and Civil Society Organizations.

The Course, which would be rolled out in five phases, would be held in Accra, Cotonou and Lagos in 2020 and 2021, with the pilot beginning in Takoradi.

"Aside the exposure to theoretical underpinnings, participants will have simulation sessions during the training to acquaint them with skills to manage real life situations.

Additionally, a panel discussion will be held with speakers from both the formal and informal maritime sectors."

Commandant Ofori explained that, the Gulf of Guinea was endowed with a vast wealth of minerals, hydrocarbon deposits and varied species of marine and fisheries resources thereby making its waters a critical route for international commerce and a shipping chokepoint.

"This region's maritime affluence has made it attractive to both state and non-state actors who exploit the inadequate control of the region's maritime domain to engage in illicit activity, adding that the Gulf of Guinea is currently the world's leading hotspot for piracy, kidnapping and armed robbery at sea," he pointed out.

According to the International Maritime Bureau (IMB)'s first quarter report of 2020, there has been a 25 per cent increase in piracy and armed robbery worldwide compared to 2019 figures of the same quarter.

Additionally, the Gulf of Guinea accounted for approximately 90 per cent of global kidnappings with 49 crew kidnapped in nine separate incidents.

Commandant Ofori said the modus operandi of the pirates indicates a noticeable shift from oil theft towards kidnapping for ransom, adding that this has been buttressed by the 2019 and 2020 figures which indicates a big climb in the number of kidnapping incidents in the region and an increase in the number of hostages being taken overall.

This, he stressed has raised concerns about oil installations, container traffic and tanker movements through the region.

He said other maritime crimes such as Illegal, Unreported and Unregulated fishing, human trafficking and migrant smuggling, marine pollution/ toxic waste dumping, illicit trade in arms, drugs and contraband and maritime terrorism also exist alongside piracy in the Gulf of Guinea.

He said it was imperative for a holistic approach to maritime security response in the region and called for commitment and collaboration across agencies.

He was hopeful that the course would provide the participants useful periscope through which mutual collaboration in ensuring maritime security in the Gulf of Guinea was achieved.

He said the outbreak of the global COVID-19 pandemic challenged traditional methods of state response to insecurity and that it was important for security Agencies to think outside the box in their response to maritime insecurity.

Commandant Albert Bentil Addison (Rtd) Former Deputy Commandant of KAIPTC, in his welcoming address, said crime at sea was thriving well at an alarming rate within the Gulf of Guinea, making it one of the most dangerous maritime regions in the world.

He called for effective collaboration, cooperation, coordination and capacity building among nations and more importantly key maritime institutions and commended the Danish Government for the sponsorship.

Mr Thomas Norup , Danish Maritime Counsellor said despite the significant drops in the number of global piracy and maritime crime incidents, the gulf of Guinea continued to experience an increasing number of maritime crimes in both international and territorial water, making it the most dangerous shipping routes in the world.

He said the world was observing an alarming trend with more violent assaults, more kidnappings for ransoms and geographical attacks, which threatened the economies of countries involved.

Mr Norup said the situation also put the lives of national and international seafarers at risk and affected international trade, fishery and the offshore oil sector.

"We all have an obligation to act and safeguard the maritime domain he stressed.

He said overnment of Denmark was committed to increasing safety and security of national and international ships in the Gulf of Guinea, and to secure peace in West Africa and the continent as a whole and was supporting in legislation, maritime strategies and research including; capacity development of Special Forces within the navies of Ghana and Nigeria.

Mr Norup indicated that since the problem of Maritime insecurity was regional, the Embassies of Denmark in Ghana and Nigeria would work closely with support and cooperation with other key shareholders in the region.

This he noted, would support the economic growth in the region, while ensuring maritime security in the Gulf of Guinea.

Akatsi South NPP Chairman calls for calm ahead of MMDCEs ann...
7 minutes ago

Chereponi: Police deployed to prevent demo against purported...
9 minutes ago