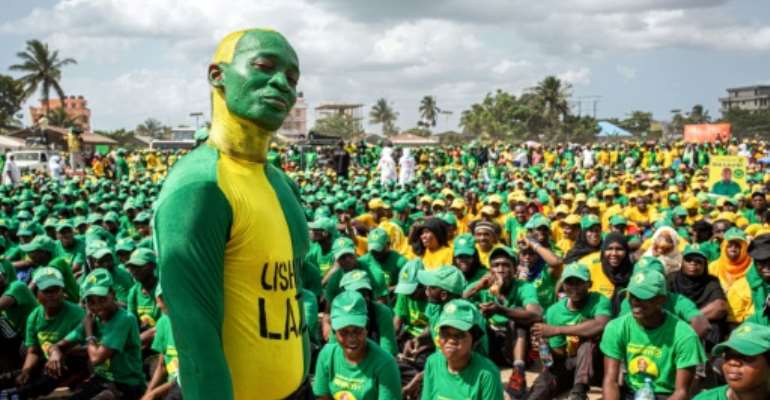 Tens of thousands of supporters of Zanzibar's ruling party and opposition gathered at rival rallies Sunday ahead of a presidential election on the semi-autonomous Indian Ocean archipelago that has a history of contested polls.

The far larger crowd was that of the ruling Chama Cha Mapinduzi (CCM) whose supporters, covered from head to toe in green and yellow, gathered in the cloying heat just five kilometres (three miles) from the opposition meeting, a sea of bright purple.

Heavily armed riot police and soldiers -- some sent from mainland Tanzania in anticipation of the vote -- patrolled the streets of the island which is best known for its ancient spice trade, paradise palm-fringed white beaches and emerald waters.

Both Tanzania and Zanzibar hold presidential and parliamentary elections on Wednesday.

Police fired teargas at small groups of stone-throwing youths near the site of the ruling party rally shortly after the simultaneous gatherings ended, an AFP reporter witnessed.

The opposition ACT-Wazalendo (Alliance for Change and Transparency-Patriots) rally took place just hours after campaign manager Nassor Mazrui was abducted and held for several hours before being dumped in a forest.

He told the crowd his car was intercepted and he was seized by six armed men. Police said they were investigating.

Supporters of the Tanzanian opposition political party The Alliance for Change and Transparency wave flags during a last campaign rally. By MARCO LONGARI (AFP/File)

The archipelago joined with then-Tanganyika to form Tanzania in 1964, and has been ruled by the CCM ever since.

"We expect big changes in the economy, and employment because the candidate has told us that it is among his priority areas if he is elected president," businesswoman Leira Shiwa told AFP.

Opposition leader Seif Sharif Hamad, whose party has long sought independence from the mainland, is taking his sixth shot at office since multiparty democracy was introduced in 1995.

He alleges that every vote was stolen from him, and many foreign observers have agreed.

"The colonisers (mainland) have oppressed us enough, so take this election very seriously ... we are ready to die for Zanzibar," the 77-year-old Hamad, who leans on a walking stick, told a rapturous crowd.

The Party for Democracy and Progress, commonly known as Chadema, is the main opposition party in mainland Tanzania. By MARCO LONGARI (AFP/File)

The opposition has condemned plans to have security forces vote a day early on Tuesday as a bid to steal the vote, and has urged supporters to go out and cast ballots on that day as well as on Wednesday.

Hamad's party is backed by Chadema, the leading opposition party on the mainland, in return for ACT-Wazalendo's support of Tundu Lissu, who is running for president of Tanzania in a vote scheduled the same day.

As on the mainland, the opposition has denounced a crackdown on freedom and democracy under union President John Magufuli.

"We are tired of the oppressions that are happening in our country," said art student Ishaka Kassim Hussein, 20.