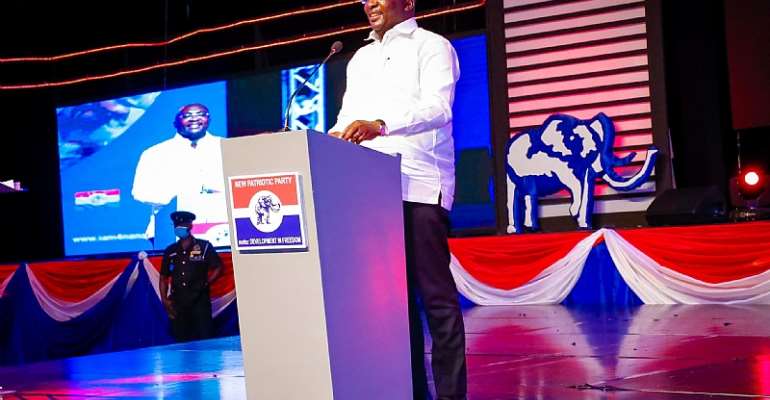 The Vice President, Dr. Mahamudu Bawumia has urged Ghanaians to rally behind President Akufo-Addo in December's election to enable him to continue his economic transformation and all-inclusive development agenda for the country.

Speaking at the fundraising launch of the 2020 NPP campaign in Accra on Friday, Vice President Bawumia said December's elections is "in my opinion, the most crucial elections of our generation" because the country is on the cusp of a major transformation under President Akufo-Addo, and reinventing the wheel will take the country backward.

"The people of Ghana know what the NDC is made up. We don't want to repeat that dance, one step forward and two steps backward," Dr. Bawumia said.

"That is what it is. One step forward, or do you want two steps backward? That is the choice that Ghanaians face and we have to make sure, we the NPP and the people of Ghana, that we will protect the gains that the leadership of Nana Addo Dankwa Akufo-Addo has brought to Ghanaians."

The Vice President noted further that the future of the country is promising under the leadership of Nana Akufo-Addo and touched on some new policies coming up.

"Nana Akufo-Addo has said that if by the grace of God we come into office, he wants to extend help to students who have qualified to go to university with tertiary loans so that they can go to the university."

"So there is a lot at stake for this election. It is the most important election, in my opinion, in our generation. Because I believe that we are on the cusp of a major transformation in this country and that is why we need to do what we can to raise the resources to support the NPP's campaign."

The fundraising campaign is aimed at getting members and sympathisers of the NPP, both home and abroad, to contribute financially towards the 2020 election campaign.