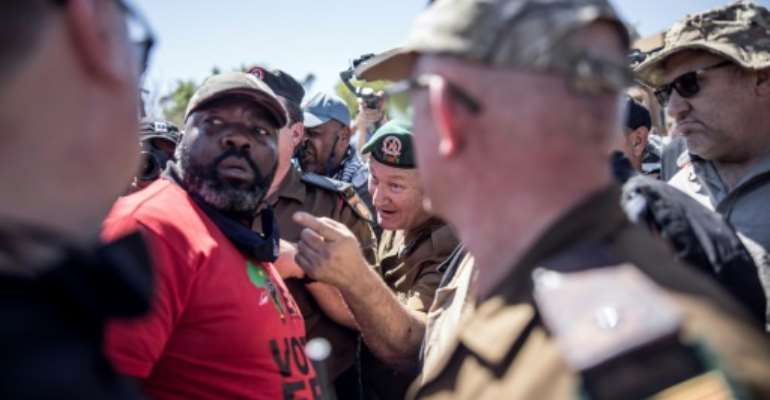 Outside the courthouse during a hearing of the murder suspects groups of whites and blacks faced off. By MARCO LONGARI (AFP)

A white farmer's murder in a rural town in early October touched off a series of racially charged events that has drawn comparisons with South Africa's apartheid past, but the truth is far more complex.

Brendin Horner was strangled and tied to a fence near the small farming town of Senekal 300 kilometres (180 miles) south of Johannesburg, the 22-year-old's body discovered on October 2.

Weeks later, angry supporters of white farmers rioted, tried to snatch the black suspects from the court -- they failed but torched a police car. And last week, black and white crowds taunted each other outside the court.

But analysts said the new tensions were not simply a replay of those from the apartheid era that ended almost three decades ago.

They are rather a result of factors including a new government policy to reduce past inequality in farm ownership, and rising criminality that is also affecting black farmers following the easing of coronavirus restrictions.

Nevertheless, white farmers have in recent months staged back-to-back protests across the country over violent attacks and murders of farmers.

Researchers say there are roughly 50 such killings each year -- less than a third of numbers seen in the 1990s and not abnormal in a country with 21,000 murders a year -- and most do not seem to be motivated by race.

But the latest murder has forced South Africa to revisit the ghosts of its past and exposed difficulties in removing the vestiges of decades of inequality for blacks.

"We would be naive to assume that race relations in farming communities have been harmonious since the advent of democracy," said President Cyril Ramaphosa.

Whites, who make up nine percent of the population, own 72 percent of farms with only four percent in the hands of blacks, according to a 2017 land audit.

Farmers around Senekal complain of a rise in crime in the region that is forcing them to cut activities. By MARCO LONGARI (AFP)

The latest tensions in Senekal represent "the microcosm of the proverbial elephant in the room with regards to South African politics which is race, racism", said South African analyst Oscar van Heerden.

"And what makes the Senekal events more emotive is it combines the issue of race which we have not resolved which we are constantly avoiding," said van Heerden.

But white farmer Gilly Scheepers, who employed the murdered Horner, disagrees that attacks are racially motivated, as he warned against taking "our eyes off the ball" of fighting crime.

"We are not here to have civil war or fight between white and black," Scheepers told AFP from the murder scene, saying the killing was a criminal act.

Tommie Esterhuyse of AgriSA, an agriculture federation said there had been a 20 percent rise in numbers of farm attacks in recent months.

And the farm violence is coinciding with government's push to fix land ownership imbalances.

The governing African National Congress has endorsed a policy of expropriation of land without compensation. Parliament has begun the process to enact the law.

That, analysts say, has created anxiety among whites they will lose their long-held farms.

Two senior ministers -- those representing the police and state security -- sat through an entire day of bail application by the two alleged killers.

Outside the courthouse groups of whites, some of them armed and wearing the uniform of the Afrikaner survivalist Kommandokorps faced off with black opposition supporters.

They sang a banned apartheid-era song with the lyrics "kill the Boer - kill the farmer" incensing pro-white protesters. The Boer are the descendants of Dutch settlers.

Blacks feel they are yet to reap the benefits expected after Nelson Mandela took over as the first black leader of the continent's most developed country in 1994.

On the other hand whites have "this feeling in being second class citizens", said Afrikaans rights group AfriForum's Ernst Roets.

But blacks have not been spared.

Senekal black farmer Robert Mphuthi, 54, has been a victim.

"They don't just take your sheep," said Mphuthi, but "they kill you", adding the attackers do not care whether "you are white or black".

Whites say they are being treated like second class citizens. By MARCO LONGARI (AFP)

Pretoria-based Institute of Security Studies crime researcher Johan Burger, sees no evidence to suggest that race is behind the ongoing farm violence.

"Everyone is facing the risk of being attacked irrespective of race," he said.

But because "attackers are almost exclusively black... white victims would perceive the attacks as racial", said Burger.

With some 2.2 million people having lost jobs because of the coronavirus pandemic, crime levels have generally increased, and isolated farms are soft targets.

In response to the violence government announced Thursday it was "fast-tracking" the implementation of a revised rural safety strategy.

Ghana running into unsustainable debt levels topping 80% of ...
20 minutes ago