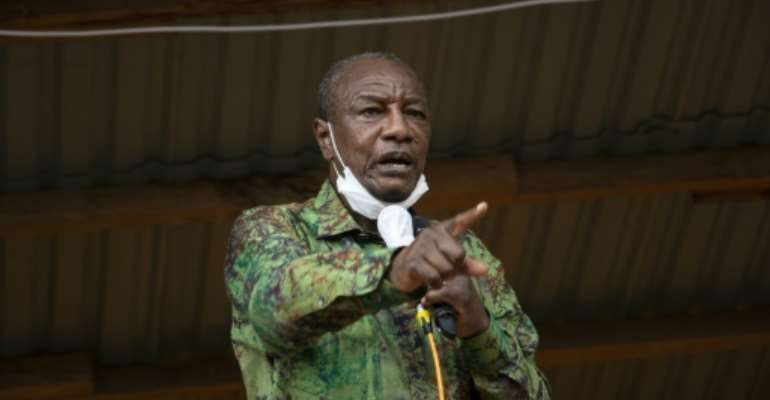 Fatou Conte and Diabate Famoro, two low-income workers in Guinea's bustling seaside capital Conakry, are divided on President Alpha Conde's economic success, just one illustration of the controversy over his bid for a third term.

The 82-year-old is running in Sunday's election in the West African state after having won two past ballots partly on promises to deliver jobs and electricity to the impoverished nation.

But Sunday's election comes after months of unrest in Guinea. Conde pushed through a new constitution in March that allowed him to sidestep two-term limits, defying months of mass protests against the move.

Still mired in poverty after a decade in power, Conde's management of Guinea's economy is a major campaign issue.

"Since Conde, we've had light," said Fatou Conte, a 41-year-old bread vendor and supporter of the president.

In Conakry, huge campaign posters of Conde, decked in the yellow colours of his party, hang by the hectic roadsides. They bear the slogan, "shared prosperity".

Posters of his main contender, opposition leader Cellou Dalein Diallo -- who was also at the forefront of resistance to a Conde third term -- read "change is now".

A former opposition activist, Conde became Guinea's first democratically-elected president in 2010 and was re-elected in 2015.

Rights campaigners accuse of him of veering towards authoritarianism, however. Security forces have killed dozens of anti-Conde protesters since October last year, for example.

Conde says he inherited deep economic problems when he came to office in 2010.

"The central bank didn't have one month of reserves, inflation was at 21 percent," he told French daily Le Monde last year.

The country was then hit badly by West Africa's Ebola outbreak, which killed some 11,000 people in Guinea between 2013 and 2016.

Conde nonetheless pursued mining reforms and launched large infrastructure projects, with his government pointing to thousands of jobs created in the extractive industries.

Guinea is home to the world's largest reserves of bauxite, the ore used to produce aluminium.

The country also has rich deposits of iron ore, gold and diamonds, and is known as the 'water tower' of West Africa for its abundant fresh-water supplies.

As well as focusing on mining, Conde has embarked on an ambitious programme of dam building to harness hydroelectric power.

The largest dam -- the huge Chinese-financed Souapiti project -- is expected to meet Guinea's electricity needs when completed, possibly this year. There are also hopes to export electricity.

"Since Conde, we have light, everything is stable," said Conte, the bread vendor, at a political event in the capital.

As women dressed sang songs praising the president, Conte explained that power access had been woeful under Lansana Conte, an autocrat who ruled from 1984 to 2008.

Yet many Guineans have seen little change, and the problems hindering development are legion.

Legislation can be sloppy, the banking system's unwieldy, corruption endemic, and infrastructure either poor or non-existant.

Bady Balde, the deputy executive director of Extractive Industries Transparency Initiative, a civil-society group, said the government had made some progress in the mining sector, particularly on tax transparency.

But that progress "is far from sufficient," he cautioned.

A report on Conde's government pledges, published this month by the association of Guinean bloggers, also found that Conde had only kept 40 out of 315 commitments -- a rate of 13 percent.

Diabate Famoro, the struggling boilermaker, said he hasn't seen the results of Conde's decade in power.

He was on his way to hospital in Conakry, accompanying his friend Sylla Mohamed Lamine, who was taking his father for treatment there.

"People talk about prosperity," said Lamine, 34, looking up at one of Conde's campaign posters. "(But)it's a nightmare".

Famoro said he will not vote on Sunday. Lamine, who often considers leaving Guinea, plans to spoil his ballot.

"Why don't I do as the others do, go to the Mediterranean and try my luck," he said.