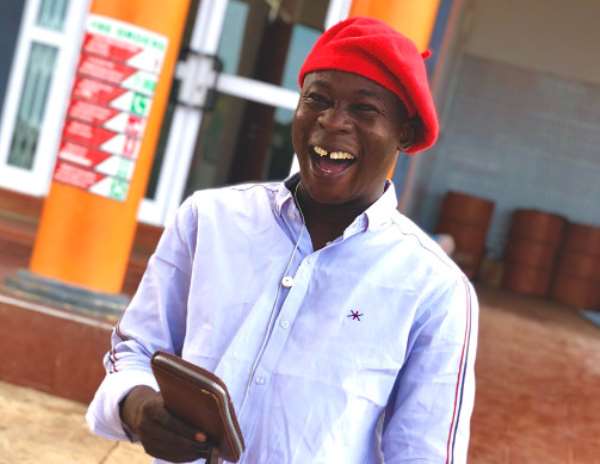 Whiles some leaders like Justice Amankwa Mensah aka JAM 1(NPP Parliamentary Candidate for Krachi West) are making strenuous efforts to bring back the lost hope of employment and restore the necessary development needed in Krachi West, especially in the affairs of the Youth, others are busily thwarting such enviable efforts by their hunky punky and reprehensible actions and inactions which is retrogressing the development of Krachi West, that remains one of the Oldest District in Oti Region but lagging behind in-terms development.

It is a fact that until very recently, the Krachi West MP’s Common Fund had almost lost its relevance and failed in its usage in all the sectors especially in Education which holds the forth for the future of the ordinary Krachi West Youths, owing to financial indiscipline, legendary levels of partisanship or political party intrusion in its affairs, instances of misappropriation, uncomplimentary audit reports, vendetta, cronyism, pettiness among other shenanigan enterprises which had thrown to the dogs, the Funds’ dignity and relevance.

This was because the Regional Minister who has the oversight responsibility on the then DCE was the MP, hence was a “defacto DCE”, manipulating the then DCE to her whims and caprices.

We must, however, be quick to add that, the recent DCE of Krachi West District had put in enough efforts and checks towards the redemption of the MP's Common Fund from these abyss' and in fact, have almost brought back the relevance of the Fund.

There is no denying the fact that, over the past 3 and half years Krachi West has seen significant developments.

Only when we thought everything was getting cosy and rosy for the District that was deprived development by the NDC and former Volta Regional Minister and MP for Krachi West “Madam Do Little”, we chanced upon the 2015 Draft audit report of the Krachi West District Assembly

which did not only get us shocked but also discombobulated in view of the incriminating findings made by the auditors in their final report.

For instance, on page 50 of the draft audit report, under the auditors' findings, the MP is reported to have procured 10 motorbikes and 7 motor tricycle at a whopping amount to the tune of; (GHS 65,843.73) which was issued in bulk to Hon MP instead of the targeted beneficiaries and no distribution list available to enable verify from beneficiaries.

Which therefore amounted to violation of section 315 of the store regulation 1984, in the words of the auditors.

Conspicuous among the beneficiaries of this motorbikes and motor tricycle are some NDC executives and members, per our checks who undeservedly received some.

In the light of this incriminating and incontestable evidence, the auditors have accordingly concluded in their Report that the MP should provide the distribution list, address and phone numbers of beneficiaries for their verification.

Per our checks, the MP as we speak, together with her "conspirators" in this create, loot and share enterprise are yet to comply with any of these directives in flagrant disregard of the orders given by the auditors and for that matter a contravention of the audit service Act.

Interestingly, the District Education Office that are the targeted beneficiaries of the motor bikes has not been able to settle its huge unavailability of motor bikes for effective supervision,some officers have to use their own motor bikes for supervision,because the office don’t have some.

Yet, the MP “Madam Do Little” thinks that the best way to spend our scarce monetary resource is to share same to her party members without shame. Does she know the difficulties people go through in raising money to pay their taxes, part of which eventually gets to the MP’s Common Fund? How callous!

One of the beneficiaries of these “diverted” motorbikes, an NDC branch executive name withheld quickly painted the tank of his motorbike to clean the embossed writings that read “Donated by Hon MP to GES Krachi West, upon sensing danger.

However, the MP is still arrogantly being belligerent and calling the bluff of everybody because she contends that no one can touch her; let alone to compel her to bring the list of beneficiaries she used for distribution.

We the concerned Youths of Krachi West are by this statement, calling on the various stakeholders to take the necessary steps to retrieve all the "diverted motorbikes" from the untargeted beneficiaries as directed by the auditors.

Our call is not premised on any parochial interest but rather a call for probity, accountability, justice and financial discipline in the affairs of Krachi West MP’s Common Fund and thus, protect the waning image of the District as a prerequisite towards the attainment of the much talked about Rapid Development.

These we think, are the essential underpinnings of every developed districts and surely,Krachi West District cannot be an exception.

The interest of the people is supreme and nobody is above the people who give the mandate.

So, we are challenging the stakeholders and Assembly members to protect the interest of the good people of Krachi West, who have been shortchanged by this "alleged diversion of Motorbikes" in pursuance to the constitution that establishes its supremacy and enforcement to the latter.

In the event that no actions is taken within a reasonable timeframe to retrieve "the diverted motorbikes ", then we shall be compelled to launch a spirited campaign against the release of the MP’s Common Fund in the ensuing years because the government have better use of their money than "waste same" to the MP without getting value for money as manifested above.

We however have full confidence in the various stakeholders to do what is RIGHT in order to safeguard the interest of the good people of Krachi West, else all the wrong beneficiaries shall be made to face the full rigours of our laws should they fail to act. If you doubted any of the claims in this article, just get a copy of the 2015 draft audit report and read for yourself.

Alternatively, you can contact any of us for the necessary confirmations.

The time to act is NOW or NEVER.

We shall be back.

Concerned Krachi West Youth, We dey for you!!!

We defend the truth even at gunpoint!!!

ALL THE CONCERNED KRACHI WEST YOUTH.

To join us, call or whatsapp the convenor.

Your independence will be respected – Akufo-Addo assures new...
28 minutes ago

He has the capacity, intellectual strength to succeed – Akuf...
33 minutes ago