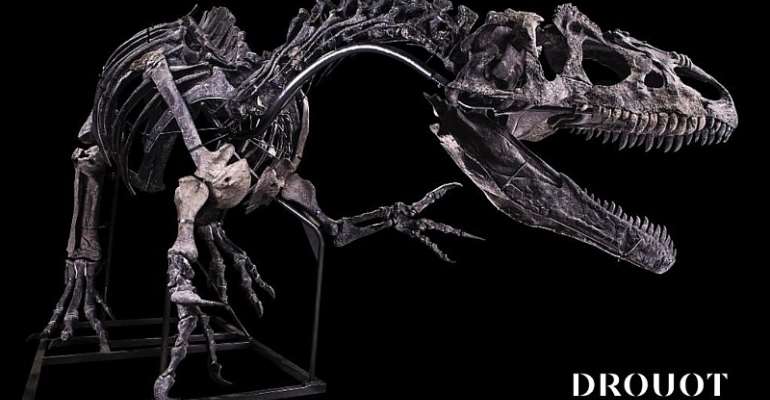 A rare skeleton of an allosaurus has been auctioned off in Paris for a record three million euros. The dinosaur, considered the grandfather to T-Rex, is nearly complete and in excellent condition and comes on the heels of another record-breaking sale of a fossil in New York last week.

The auction on Tuesday afternoon at the Hôtel Drouot in Paris was coordinated by Binoche et Giquello, who originally estimated the allosaurus at 1.2 million euros.

Alexandre Giquello, says the auction house was lucky to "have this large, large fossil," which is about "70 percent complete" and "admirably restored."

The final anonymous foreign bidder ended up paying a little over three million euros for the creature, which lived during the upper Jurassic period around 150 million years ago.

The skeleton, made up of 100 pieces measures 10 metres high and 3.5 metres long.

Injuries to its ribcage, discovered using X-ray technology during the restoration give clues to what may have been its last battle.

It was found in 2016 in Wyoming in the United States and is valuable due to its excellent preservation thanks to its natural surroundings.

"It's certain that the dinosaur died near the water. It was covered by sediment, and the fact that it was covered allowed it to fossilize," fossil sales expert Iacopo Briano told the press.

Second record breaking sale
It had never previous been up for sale.
Prior to the auction, Eric Mikeler, a natural history expert, and rival from a different auction house contacted Drouot with accusations that the right foot of the allosaurus skeleton had been replaced with a copy.

According to Le Parisien daily newspaper, a meeting was held with the special council which oversees auction sales rules (CVV) and the request to have the sale suspended was rejected.

Giquello confirmed that the paperwork for the skeleton was in order and that everything had been declared.

"The fact that it is 70 percent complete is already exceptional. The rest is made of resin," he said, as per rules in place for the sale of fossils.

Among the other items on sale on the same day; meteorites, butterflies, dinosaur eggs and even the tusk of a woolly mammoth.

The sale of a T-Rex surprised bidders last week when it sold for 31.8 million dollars at Christie's in New York – smashing the previous record for a dinosaur skeleton.

Dating back some 67 million years, the near-complete skeleton was originally estimated at around 8 million dollars.