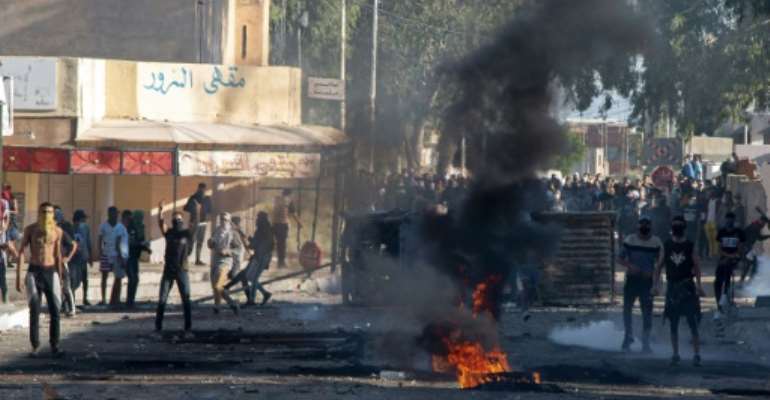 Angry residents took to the streets of an impoverished Tunisian town on Tuesday after a man died when authorities demolished an illegal kiosk where he was sleeping.

The shop in Sbeitla, in the central province of Kasserine, was demolished in the early hours on the orders of local authorities, security sources told AFP.

Abderrazek Khachnaoui, the father of the shop's owner, was killed in the operation, according to the same sources and his son.

"I was not informed of this decision... and agents of the municipality proceeded with the destruction without checking if there was someone inside," said the son, 25-year-old Oussama Khachnaoui.

"My father, who was only 49 years old, died on the spot. Security agents fired tear gas at my family who had tried to approach my kiosk to save my father," he told AFP.

The death sparked angry protests by residents who blocked roads and set fire to a municipal car in Sourour district, where the shop selling newspapers and cigarettes was located, witnesses told an AFP correspondent.

The protesters also threw stones and other objects at the security forces, said interior ministry spokesman Khaled Hayouni, who did not confirm the cause of the man's death.

Military and security forces were deployed "as a precaution" to protect sensitive sites in the town, said defence ministry spokesman Mohamed Zekri.

Sbeitla, in Tunisia's economically marginalised centre, has often seen protests in the past over lack of jobs and investment.

Youths often turn to selling newspapers and bread on the informal market in order to support their family's incomes while out of work.

Tunisia's Prime Minister Hichem Mechichi on Tuesday voiced his support for Khachnaoui's family, announcing the launch of an enquiry into the incident.

In a statement, he said he had sacked two top regional officials, a district security chief and Sbeitla's police head, as well as sending Interior Minister Taoufik Charfeddine "immediately" to offer support to the victim's family.

Inland regions of Tunisia have higher unemployment than the already dire national average, which is currently at 18 percent and could top 21 percent by the end of the year.

Khachnaoui's death came as Tunisia prepares to mark 10 years since a revolution sparked when a young street vendor, Mohamed Bouazizi, set himself alight to protest against police harassment.