Release of hostages in Mali a 'victory' for transition government 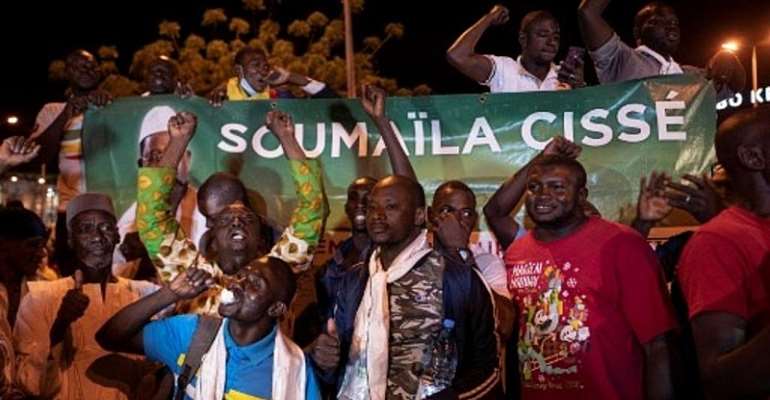 The release of four hostages on Thursday, including prominent Malian opposition politician Soumaïla Cissé, is seen as a victory for Mali's transition government. But it could also benefit the insurgency in the north of the country.

“I'm very happy to be here,” Soumaïla Cissé told RFI shortly after his release on Thursday evening. “I want to thank everyone who helped secure my release, and especially the Malian people. I'm very proud to be Malian.”

Cissé described his six months in captivity in the Sahara as “austere” and “difficult” saying he had been almost permanently isolated. He hadn't, however, suffered physical or verbal violence.

In an interview with Mali state television he specifically thanked the “new Mali authorities” which had changed during his absence.

“The president and vice president were sworn in on 25 September, on the 26th my abductors asked me to make a video to say that I was alive. This shows President Bah Ndaw was effective, he moved fast and was diligent."

Cisse, 70, a popular politician who served as finance minister in the 1990s, was kidnapped by gunmen while campaigning for legislative elections in the northern region of Timbuktu in March this year.

The jihadist group Jama'at Nusrat al-Islam wal-Muslimin (JNIM), an al-Qaida affiliate, claimed responsibility for both his kidnapping and that of the other three released hostages: French aid worker Sophie Pétronin, Pierluigi Maccalli and Nicola Chiacchio.

Cissé's release is a significant victory for Mali's interim leadership, which is overseeing an 18-month transition back to civilian rule after President Ibrahim Boubacar Keïta (IBK) was overthrown in a military coup on 18 August.

“Negotiations for Cissé's release began under IBK but they were half-hearted”, said Emmanuel Dupuy, a specialist in security studies at IPSE.

“The interim government was the one to really lead these negotiations and they've shored up their position," he explained.

"Both the French government and the Italian government has thanked them for their efforts. They've shown themselves to be more efficient than IBK.”

The hostages were freed less than a week after Malian authorities released more than 100 convicted or suspected jihadist prisoners in what was seen, though not overtly declared, as a prisoner swap.

Dupuy said the figures are in reality much higher and some "240 jihadist fighters have been freed”.

It is not clear whether or not a ransom was paid.
The release of the four hostages was obtained through the joint efforts of the “Mali security services, intelligence services, volunteers and international partners,” Ousmane Issoufi Maiga, head of the Mali hostage crisis centre, told RFI.

He declined to name the countries involved.
“I'm very happy, and very proud that we managed to unravel the problem,” Maiga said.

There were reports that the hostages had in fact been freed on Tuesday and yet they left the town of Tessalit, near Kidal, for Bamako on Thursday.

Maiga explained the delay as a simple matter of logistics.

“They were very far away, it took a long time to get from Tessalit,” he said.

Wassim Nasr, a specialist on jihadi terrorism with France 24, said it was linked to last weekend's prisoner release.

“The jihadists asked for a three-day delay in order to be able to hide the people they wanted to hide,” he explained, “knowing that in the batch of freed prisoners there were three prominent jihadists, but that the rest of them were not really involved.”

While Maiga told RFI that “details about the timing of the negotiations would come later”, Nasr was able to fill in some of the gaps.

“We know that negotiations to free the hostages began in April, a little less than a month after Soumaila Cissé was kidnapped,” he said.

“Despite the coup, the ruling junta kept the same emissary in place and a deal was agreed on in early August.”

French aid worker Sophie Pétronin benefited, Nasr said, from the concerted effort to secure Cissé's release, given that “the jihadi themselves have wanted a deal for a while”.

During an interview with the head of the Aqim Shura Council, Nasr asked whether Pétronin could be released. “He told me very clearly, 'We are willing to free her if our people are freed from Malian prisons.'”

France's role in the negotiations would appear to have been minimal.

“After France refused to accept the demands, Al-Qaeda jihadists stopped talking to France,” Nasr explained. “They said: 'We don't want France to be the broker for any hostage liberation in the Sahel region.'”

“The insurgents have a huge political gain,” said Nasr, because most of the prisoners who were freed weren't implicated in jihadist activity, they were people from the region where we have the insurgency."

They were providing jihadists with water, selling them phones, motorbikes.

“Al-Qaeda, which is really entrenched inside the population in northern Mali will be able to build on this politically.”

The situation is likely to strengthen one man in particular: Iyad Ag Ghali – the Tuareg leader of Malian Islamist group Ansar Dine and who has acted as go-between in securing the release of hostages kidnapped by al-Qaeda in the past.

“Iyad Ag Ghali will be able to say, 'We freed those people.'”

Emmanuel Dupuy agreed that "Iyad Ag Ghali and AQIM can present themselves more than ever as the ones you can negotiate with”, in opposition to Islamic State armed group.

You must be encouraged and supported for not being a spectat...
10 minutes ago