Rape and murder of woman in Algeria sparks outrage 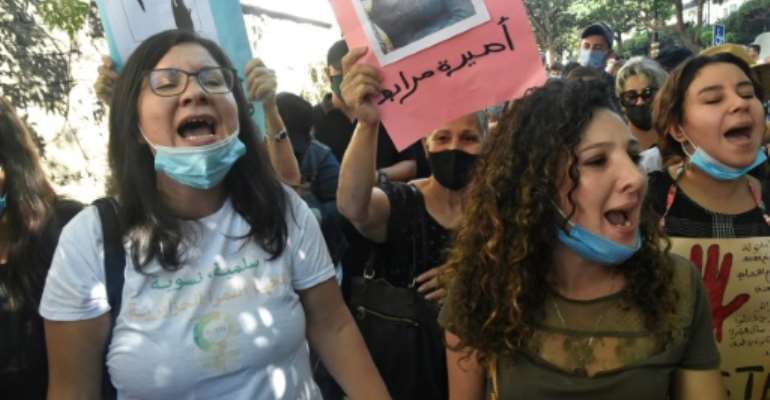 Demonstrations against violence against women were held in multiple parts of Algeria in the wake of the rape and murder of a 19-year-old woman. By RYAD KRAMDI (AFP)

The rape and murder in Algeria of a 19-year-old woman sparked cries for action on gender-based violence in the North African country and calls to bring back capital punishment.

The body of the young woman, identified as Chaima, was found in early October at a deserted petrol station in Thenia, 80 kilometres (50 miles) east of the capital Algiers.

She had been beaten, raped and burned alive, according to local media.

The suspect, who has reportedly confessed, is being charged with "rape and voluntary homicide with premeditation and ambush, using torture".

Chaima's mother said the man was an acquaintance of the family, against whom the young woman had previously pressed rape charges in 2016.

The killing set off a wave of outrage on social media in Algeria, where internet users condemned the "heinous" crime and demanded justice, with many calling for the death penalty, under moratorium in the country since 1993.

A message shared widely online reads: "I am Chaima, I was raped in 2016 and I had the courage to press charges in a conservative society. I am still Chaima, it is 2020 and I have again been raped by the same rapist, who stabbed and burned me. #IAmChaima."

In a video that circulated on social networks and was picked up by local TV stations, Chaima's mother directly addressed Algeria's President Abdelmadjid Tebboune and demanded the execution of the perpetrator.

Many Algerians also took to social media in support of reinstating the death penalty.

"Execution should be applied to the killer, to be an example for all those who think of doing the same thing," one Twitter user wrote.

A protester demonstrating against femicide in Algeria held a sign reading in French, "We dream of a country where women who talk about rape are heard more than men who talk about the veil". By RYAD KRAMDI (AFP)

Another said: "We must open the debate on the death penalty, the monster who killed her has no place in society or in prison."

But others in the country rejected execution as the best way to deter femicide, the gender-related killing of women and girls.

Femicides Algeria, a group that tracks such homicides, said: "It is not through the death penalty that we will give her (Chaima) justice, it is rather the law that must be changed and applied."

The activists have counted 38 femicides in Algeria so far this year.

They recorded 60 in 2019, noting on their website that with so many cases going unreported or unconfirmed, the actual number "is much higher".

Hassina Oussedik, director for human rights group Amnesty International in Algeria, told AFP that "the death penalty is not a deterrent".

"It is discriminatory and does not protect the most vulnerable."

She added it was necessary to "change mentalities and the judicial system for the psychological and legal care of victims, launch national awareness campaigns, open shelters and train the various institutions".

The Free and Independent Women's Collective of Bejaia, a city on Algeria's northeast coast, said Chaima's killing "adds to the long list of femicides, which continues to grow in the face of complicit silence, the justification of violence and the absence of real measures".

To "break the silence", the collective called for a protest on Thursday in Bejaia.

The calls for action and solidarity have spread across the country.

The Algerian Women for Change Toward Equality group also organised a rally on Thursday, in Algiers, to "denounce the heinous crimes" that led to Chaima's death and those of the 38 women killed this year.