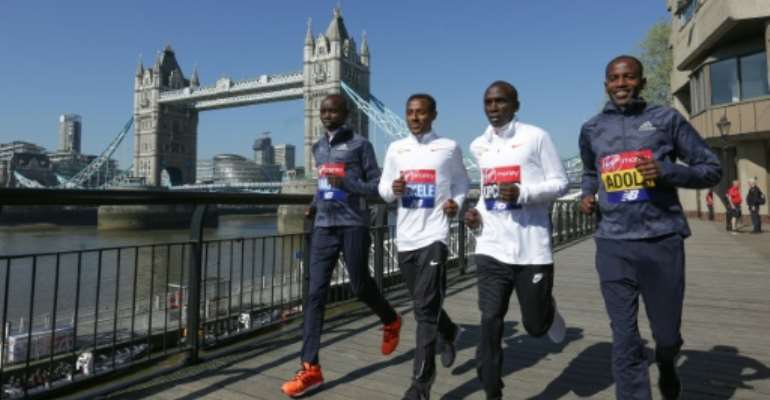 Eliud Kipchoge and Kenenisa Bekele -- the two fastest marathon runners of all time -- said there were too many variables to predict a world record in Sunday's London Marathon.

Event director Hugh Brasher believes that record-breaking performances are possible on the flat, fast course, despite potential rain and training interrupted by the coronavirus pandemic.

Instead of the traditional route, the London race, involving only elite runners, will be run on a new looped course comprising 19.6 laps of St James's Park in central London, with no crowds.

When asked if a world record was possible, Bekele, 38, said: "It's a new course. Unless we can check at least the first time or before this if someone did on this course you can guess.

"But at this moment it's really difficult to say if it's a really fast course or not. Anything is possible if things go well."

Four-time London winner Kipchoge, 35, said he was happy to be back in action after nearly a year on the sidelines due to the pandemic.

The Kenyan said he was not concerned about running laps but Bekele said he would prefer to run a big loop in the British capital.

"It's not an easy thing," he said. "It's a long way and maybe at some point you're losing some speed because of the curve. I don't know how curved it is, we will see on Sunday."

Both runners admitted the race would have a different feel without tens of thousands of fans lining the route.

"Crowds plays a massive role, especially in marathons," said Kipchoge. "Sunday will be a different race whereby it will be a silent feel. Maybe a bit of music but not music from the mouths of the normal crowd."

The Kenyan defended the use of the controversial carbon-fibre shoes he used to break the two-hour barrier in Austria in October 2019, which did not count as a world record due to the special conditions, including the use of rotating pacemakers.

Alongside the elite race, a total of 45,000 runners around the globe who are unable to take part in the race because of the pandemic will aim to complete 26.2 miles during a 24-hour period from midnight to midnight on Sunday.