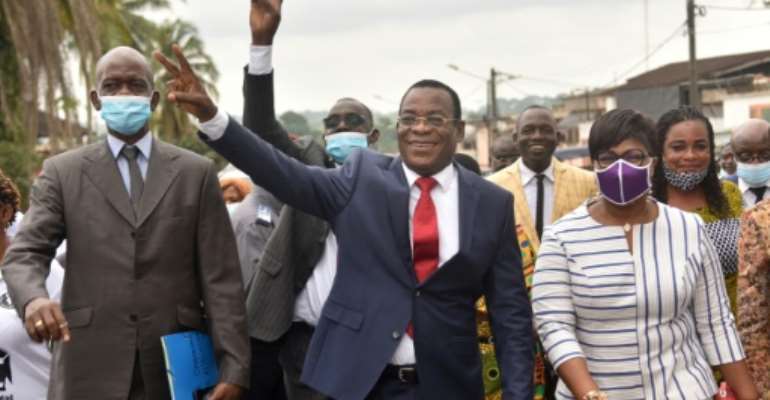 Pascal Affi N'Guessan, centre, is one of three challengers to Alassane Ouattara in the October 31 vote. By SIA KAMBOU (AFP/File)

Ivory Coast's former prime minister and presidential candidate Pascal Affi N'Guessan on Tuesday joined calls for "civil disobedience" ahead of next month's election in response to Alassane Ouattara's bid for a third term.

Former president Henri Konan Bedie, who will also be on the ballot, had launched the call on Sunday to thunderous applause at a meeting of the country's main opposition parties.

"Because of the dictatorship of Alassane Ouattara, I fully and totally subscribe to the disobedience advocated by president Henri Konan Bedie and all political and social forces in Ivory Coast," said Affi N'Guessan.

Neither candidate elaborated on the form the civil disobedience should take.

The election in the West African country is expected to be tense, with Ouattara set to defy a constitutional limit of two terms. The 78-year-old and his supporters argue that a 2016 constitutional tweak reset the clock on his time in office.

"It is an admission of weakness on the part of the opposition which is afraid of the election," he said.

Bedie, Affi N'Guessan and Kouadio Konan Bertin, a dissident from Bedie's party, are the only challengers to Ouattara after the electoral commission excluded 40 other would-be candidates for the October 31 vote.

Ouattara had said in March that he would not seek another term, but made a U-turn just four months later when his preferred successor, prime minister Amadou Gon Coulibaly, died of a heart attack.

The world's top cocoa grower remains scarred by a brief civil war that erupted after 2010 elections, when then president Laurent Gbagbo refused to cede to the victor, Ouattara. Months of violence claimed around 3,000 lives.

MPs split heads as anti-LGBTQ+ bill to be laid in Parliament...
11 minutes ago

Angola President in Ghana for 3day visit
16 minutes ago