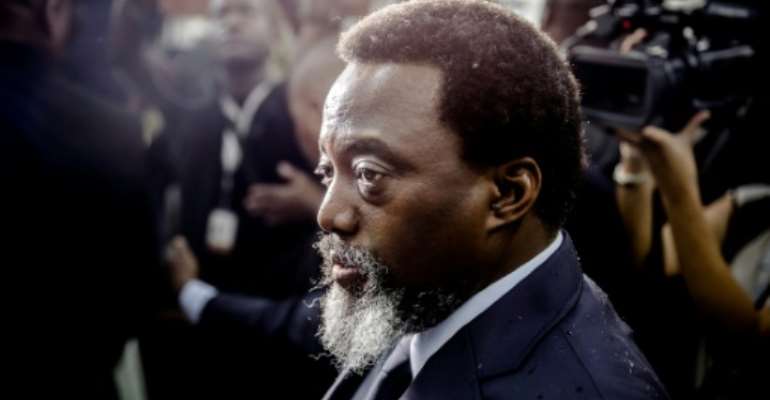 Kabila stepped down in January 2019 after 18 years at the helm of the Democratic Republic of Congo. By Luis TATO (AFP)

DR Congo's President Felix Tshisekedi has held a rare meeting with his predecessor Joseph Kabila, as officials in the fragile coalition government say the former leader could return to the political stage.

Tshisekedi, who took over from Kabila in January last year, governs alongside supporters of his predecessor, who have a commanding majority in parliament and hold most positions in the government.

"The two high-ranking personalities discussed the progress of the coalition," the Common Front for Congo (FCC) -- a parliamentary grouping of parties loyal to Kabila -- wrote on Twitter.

But the head-to-head did little to quell tension that has been rising for months, and "points of contention" remain, the two camps told AFP on Monday.

With the next election due in three years, Environment Minister Claude Nyamugabo told journalists over the weekend that he was already working for the return of Kabila to office.

"He is the president of my party. I can only believe in his return," he said.

Kabila's PPRD party expressed the same sentiment on Saturday in a tweet that was quickly deleted: "The return of Joseph Kabila is not a slogan, it is a reality. He will return to power and we are working on it."

"Our officials have the right to think aloud without involving the FCC," a party representative told AFP when asked about the tweet.

Despite fears that he would seize a third mandate by force, Kabila stepped down in January 2019 in the first peaceful transfer of power since independence from Belgium 60 years ago.

His supporters now argue there is nothing in the constitution that would prevent him from running again.

And both sides have been ratcheting up the political tension, accusing each other of abuses of power.

In July, at least three people were killed in heated protests organised by Tshisekedi's UDPS party to denounce the appointment of a new election chief who has been accused of rigging votes in favour of Kabila.