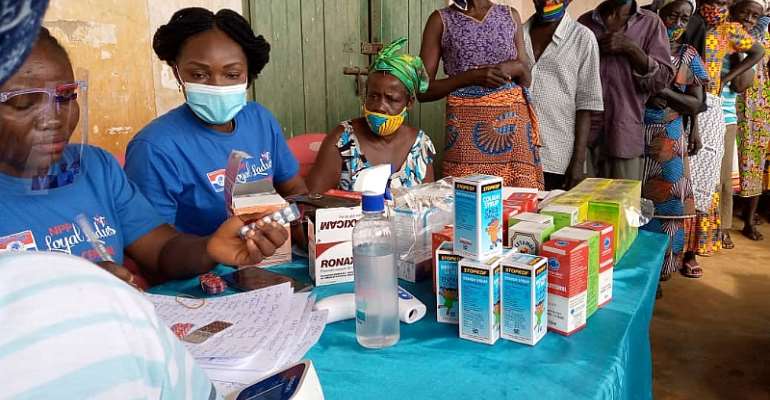 The health of the constituents of Twifo Atti-Mokwa Constituency is of much concern to the NPP Parliamentary Candidate, Mr Ebenezer Obeng Dwamena and his campaign team.

For the people of Twifo Kayireku, yesterday 20th September, 2020 will remain one of the most unforgettable moments in their lives as they had their health screened, some treated and others directed to seek further attention.

Haven conducted needs assessment of almost all communities in the constituency, Ebenezer Obeng Dwamena has begun the implementation of the recommendations.

These needs have been prioritized and community-specific interventions have been instituted.

It is against this background that TAM Loyal Ladies and Campaign team affiliated to the ruling New Patriotic Party (NPP) conducted health screening exercise for the people of Twifo Kayireku.

Diabetes Mellitus, one of the silent ailments that kill both the young and old, was screened for by the medical team of the Parliamentary Candidate for the NPP.

The aged were also screened for hypertension as it has become one of the rising non-communicable conditions in the country as a whole.

The sheer numbers of people who trooped to the medical outreach centre to access the medical services spoke volumes of having intervened appropriately in providing support for community and individual needs.

It is worthy of note that the campaign machinery of the NPP and for that matter #TeamDwamena is well oiled to the extent that, as the medical outreach was ongoing, the campaign team led by the PC took advantage to embark on a house-to-house interaction to explain to residents the need to give President Akufo-Addo another term and him as the Member of Parliament come December 7.

The medical outreach service offered treatment to minor ailments and referred those with major ailments to health facilities for the appropriate medical attention.

As part of the composite plan for the outreach program, fun games were also organized for the youth to engage in activities of socialization.

It was a spectacle seeing the District Chief Executive taking part in the entire program and ensuring that no stone was left unturned to unearth the victory that is much desired.

He asked constituents to be law abiding and help to have a peaceful election in December.