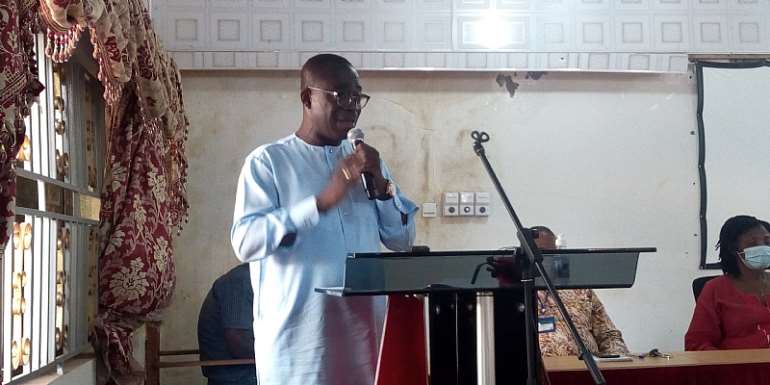 Deputy Minister of Energy In-Charge of Power who doubles as the Member of Parliament for Afigya Kwabre South in the Ashanti Region Hon. William Owuraku Aidoo in collaboration with the Savannah Regional Coordinating Council has launched the National Electrification Scheme (NES) project at the Savannah Regional capital of Damongo.

Speaking during the launch of the project at the Savannah Regional Coordinating council attended by district chief executives across the Savannah Region, the deputy energy minister said the Government of Ghana under the leadership of his Excellency the President Nana Addo Dankwa Akuffo Addo, seeks to provide a reliable supply of energy in all forms to all Ghanaian homes and businesses.

He said the development agenda of Ghana is focused on widening the access of energy to all households, productive sectors, and social infrastructure in order to facilitate the implementation of the growth and poverty reduction strategy which is a millennium developmental goal (MDG) - based poverty reduction strategy for Ghana, adding that the Ministry of Energy has since 1992 been implementing the National Electrification Scheme (NES) aimed at extending the reach of electricity to all parts of the country by the year 2020 as part of the energy interventions for poverty reduction in the rural areas".

He disclosed again that since the inception of the programme, only 478 communities were connected to the National Grid but was quick to say that much progress has been made since over 11,000 communities have been connected to the National Grid with 85.17% of the population now having access to electricity making Ghana one of the best in Africa interms of electricity coverage.

He further stated that, with the vigorous programme underway, it is expected that Ghana shall achieve the universal target by the year 2025 should the required funding be available.

The Ministry of Energy is making effort to bring the access rate of 54.51% in the Savannah Region to be at par with the National Average of 85.17% . In view of this, a number of electrification projects have awarded under contract to connect some communities to the National Grid.

Hon. OWureko Aido said Government in it's effort to providing support to local companies has signed a contract agreement with M/S Tropical Cable & Conductor Limited ( TCCL) for the execution of this very electrification project and upon completion, about 16,000 households are expected to be connected to the National Grid.

The project he said is fully funded by the Government of Ghana ( GoG ) and all statutory processes including Cabinet, parliamentary approvals and Contract agreements have been secured.

The Savannah Regional Minister, Hon. Braimah Adams Salifu also in an address said electricity is an essential thing that has come to stay. He told the large gathering present that, the days where politicians erect poles just to woo votes of constituents during electioneering campaigns are over so the participants should clear every little doubt they have because "it's not a political ploy to woo voters.

He further stated that the NPP Government is committed to the cause of ensuring that every community is connected to the National Grid.

Political parties, religious leaders etc took part in the in inaugural ceremony with many of them including DCEs getting the opportunity to ask the Hon minister questions relating to the energy and power issues which he readily answered.