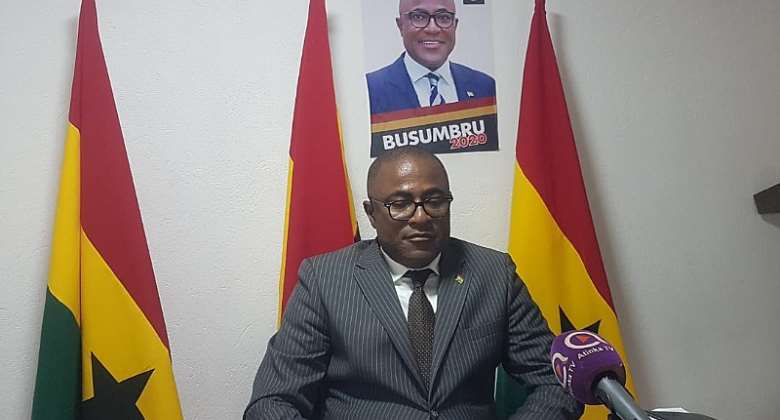 The Founder and Flagbearer of People's Action Party (PAP), Mr. Kwesi Busumbru, says he is more than ready to pay the GH¢100,000 for nominations forms in his presidential bid.

He claimed though the amount involved is too much money, is outrageous he has no option than to pay in order to advance his electoral fortunes.

"Such an amount is outrageous and has rendered the small parties the incapable to participate in the election, this amount signifies that only the chosen few can run an office in Ghana which is not a democracy", he said.

He also said he was not surprised by the EC decision because it's not a new thing.

The PAP Founder also suggested that there should be a reduction of the amount since the country and the world is battling with COVID-19 and have affected all economic activities.

"EC should have discussed these small parties before taking its decision. However, I will suggest that EC should reduce the amount since we are not in normal time. I will also say the Constitution should be amended, the president should have no right or power to appoint the Electoral Commission chair or Inspector General of Police because shows no check and balance in the system and for every country to move forward there must be check and balance".

Presidential candidates readying themselves to contest in the upcoming December 7 general elections will be required to pay a whopping GH¢100,000 for nominations forms.

Parliamentary candidates on the other hand will pay GH¢ 10,000. Both forms are to be accessed on the Electoral Commission website.

The Commission at a press conference on Monday stated that the candidates after purchasing their forms are required to submit them from October 5 to 9 between 9-1 pm and 2-5 pm each day.

In a bid to comply with COVID-19 protocols, candidates may be accompanied by ONLY 5 of their supporters when submitting the forms to Electoral Commission.

A total of 29 political parties are in the EC’s book this year.