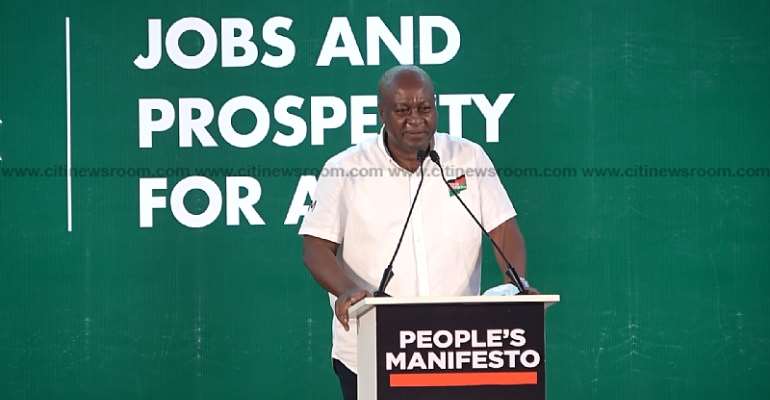 The ruling New Patriotic Party (NPP) is hastily implementing campaign policies contained in the NDC People's Manifesto for the 2020 elections, according to the Flagbearer of the main opposition, John Dramani Mahama.

Speaking at a town hall meeting organised by the NDC in Kumasi, he cited issues related to the legalisation of okada, cancellation of licensure examinations and inclusion of private Senior High Schools in deprived areas as part of the free SHS policy as examples of policies the Akufo-Addo government is seeking to implement even before the 2020 general elections.

“The NPP seems to be implementing some of the policies captured in our manifesto. Recently, they revealed that consultations have begun to review the law banning the activities of okada riders. Similarly, the Teacher licensure exam has been suspended after we promised to cancel it in our manifesto. In the same vein, owners of private schools are being engaged after we promised to extend the coverage of the free SHS policy to such schools in deprived areas without government’s free SHS. Even though they accused us of not thinking through our promises, the NPP is implementing them”.

During the NDC’s town hall meeting in Kumasi, different speakers took turns to explain into detail some key issues captured in the party’s 2020 manifesto.

The speakers touched on issues ranging from economy, agriculture, education, trade and industry among others.

Some key aspects of the NDC manifesto which were highlighted included the 10 Billion Big Push geared towards infrastructure, withdrawal of the law banning the importation of salvaged vehicles, and the legalisation of okada for commercial purposes.

The former president used the occasion to assure Ghanaians that his party will make corruption unattractive should he be voted for on December 7.

He warned his party members to avoid all forms of corruption as he said all persons found culpable will be severely dealt with irrespective of their political affiliations.

The NDC flagbearer outlined the construction of roads as some priority areas the next NDC government seeks to concentrate on.

He also promised to fix the Santasi–Apire road in Kumasi where residents had a demonstration on Tuesday as a result of its bad nature.

“All highways, from Kumasi to Obuasi, Afloa to Ho and others, will be constructed. We shall also construct the eastern corridor road, western corridor, and other urban roads. This morning I heard some residents of Santasi demonstrating for their roads to be fixed. They shouldn’t worry. With the Big Push, we will use that to fix it for them”.