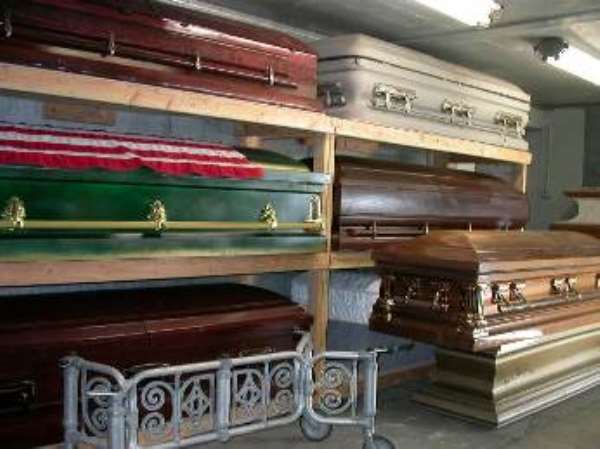 Members of the Coffin Makers Association (CMA) based in Ayigbe Town, a suburb of Accra, have expressed concern over the low patronage of their products, a situation they attribute to their relocation from Korle-Bu Mortuary area to the present site.

According to the chairman of the association, Mr Anane Adjei, sales were good “until our ejection from the mortuary area [at Korle-Bu] in 2004.''
He said at the old site members sold an average of four coffins each week but they now hardly sell one coffin in a month.

The situation has led to some of them being ejected by their landlords because they were unable to meet their rental obligations.

“Even as I am standing here, my wife is leaving me, because as a bread winner I am not able to support the home”, Mr Adjei claimed.

One Edward Nii Odu, also a coffin maker, complained about an Accra Metropolitan Assembly (AMA) order restraining them from spraying their products in their workshops. This he said has compounded the woes of coffin producers in the area.

He appealed to the authorities to allocation part of the parcel of land around the Korle Lagoon to the coffin makers.

Coffins remain an important part of funeral and burial arrangements for bereaved families.

In recent times though, there have been disturbing developments about deviants stealing these items after emptying their contents in the cemeteries.

To outwit these miscreants some bereaved families have resorted to boring large holes in the coffins before they are lowered into graves.