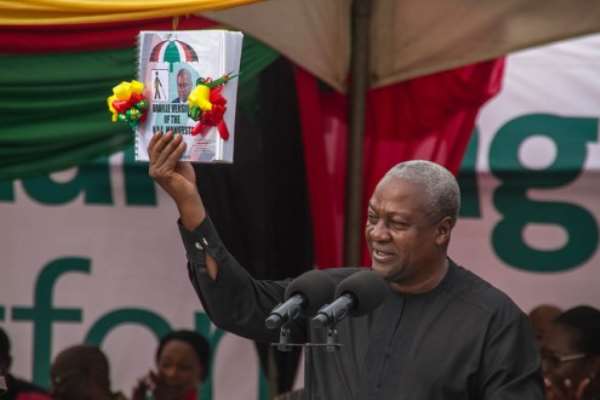 For the sake of the prosperity of Ghana and Ghanaians, and in order not to judged unfavourably by posterity, I invite all discerning Ghanaians having the collective interests of Ghana and the citizenry at heart to join my social movement that has political resonance. It is called "Operation Dump Mahama". This movement is intended for campaigning to sensitize the Ghanaian electorate to REJECT the NDC presidential-candidate John Dramani Mahama at the impending 7 December 2020, general elections.

The founder of "Operation Dump Mahama", Rockson Adofo, the proud son of Kumawu/Asiampa, will like all discerning Ghanaians to bear in mind the following wise and proven sayings when they go to the polls on 7 December 2020, to elect their president and parliamentary representatives for 2021 to 2024. They have to bear in mind and understand the relevance of "Once bitten, twice shy". What did our sagacious forefathers mean by it? They simply meant to warn us against going down the same path and spot where you had once slipped and injuriously fallen down. You have to avoid the spot or be extra prudent when you are going down the same path, being very conversant with its inherent merciless dangers.

Then President Mahama had declared that he would not listen to any Ghanaian who had not been a President of Ghana or any nation before. To emphasise how serious he was to upholding his uttered belief, he descriptively compared himself to suffering from a dead goat syndrome, thus, not giving a hoot about whatever anyone says but will stick solely to his made decisions irrespective of whatever. This was at the time that Ghana and majority of Ghanaians were going through economic upheaval and were in unison calling on him to re-examine his policies to make things a little better or bearable for Ghanaians.

While there was untold power outages (Dumsor) for four years in the nation, electricity consumers were still required to pay hefty electricity bills, although without getting energy supply. A President who in a flash saw the devastation of surface mining (galamsey) to the nation hence seized the excavators of some miners, is today promising to release not only the excavators to their owners but all their confiscated land concessions for doing ruinous galamsey. A President who banned Okada for being dangerous for commercial means of transport, is today promising to legalise them.

As desperate as he is for power, he has gone back to lick back his own sputum as the dog does. Do you trust such a fellow, who has again, not long ago, stood in front of his political audience to announce to them that as a politician, he will tell both lies and the truth in election year to his audience as long as what he tells them can turn their hearts to him to win the election. Is he not rightly doing so with his 2020 campaign manifesto? Is he not lying to Ghanaians with his many promised freebies to hoodwink the people to vote for him only to abandon the promises once elected?

"A bird in hand is worth two in the bush". President Akufo-Addo, the visionary, selfless, dynamic, dedicated, incorruptible and a man demonstrably ever ready to be of service to his nation and people, has implemented Free Senior High School education in Ghana. John Mahama and his NDC party poo-pooed the Free SHS education policy with their numerously infantile TV and radio advertisements during the dead of election 2012. Now, this same man seeing how Ghanaians have embraced the Free SHS policy, is saying he will maintain it, and even extend it to cover private schools. Does he have the knowledge to run a Free SHS programme in the first place, and if yes, why did he initially criticise it and still plans to cancel it through his, "I shall review" antics?

While President Akufo-Addo is implementing policies and programmes to take Ghana out of foreign dependency to make the nation a respectable self-sufficient country of respectable persons, John Mahama on the other hand is frivolously craving indulgence in the dehumanization of Ghanaians by his reckless populist promises and policies.

"Possession is better than expectation". President Akufo-Addo has given Ghanaians hope by his programmes and policies. He is practically on the path of industrialising Ghana by his One District One Factory programme. He has demonstrated that Ghana can in future be self-sufficient in her food requirements by massively embarking on the programme of "Planting for Food and Jobs". There are many things that President Akufo-Addo has done and is doing or envisages to do. While John Mahama took Ghana to the International Monetary Fund (IMF), to subsequently have Ghanaians suffer its harsh conditionality of public sector jobs and salaries/wages freeze, bringing about unprecedented joblessness in the nation, President Akufo-Addo on the other hand has taken Ghana out of the IMF and has been creating jobs for the people.

A visionless President who could not create any jobs for the youth hence the formation of an Unemployed Graduate Association in Ghana, by now giving hope to Ghanaians that he will create one million jobs in Ghana within four years if given the nod to stage a successful comeback feels he is much better than he who (Nana Akufo-Addo) has created jobs for the people, leading to the automatic dissolution of the Unemployed Graduate Association.

Is Nana Addo not better than John Mahama hence the veracity of the proverb, "Possession is better than expectation"? Ghanaians now have jobs. Ghanaians now see projects being realised as promised by Nana Addo. All these are possessions. However, all that the fickle-minded Mahama is promising are only expectations that may never be fulfilled as he is clueless and cannot think up solutions.

This is just the highlight of, or the groundwork for, Operation Dump Mahama, as it is going to be a tough campaign undertaking to persuade all thoughtful Ghanaians to make a good choice when they go to the polls, but not to fall for the shenanigans of John Mahama and his bunch of NDC short-sighted corrupt individuals.

All interested fans of Rockson Adofo, family members, friends and townsfolk, are to see themselves as members of the movement to ensure that presidential-candidate John Mahama gets dumped at election 2020. Let us all go out in our multitude to campaign for the re-election of President Nana Akufo-Addo, the visionary leader, by the grace of God Almighty.

This year's election is not going to be very easy but very tough. Therefore, let us hit the ground to take the good and truthful message to the Ghanaian electorate. As the Ark of God always went before the Israelites in the wars to grant them victory over their enemies, so should the message hereby entailed be our clarion call with "The battle is the Lord's" being our similitude of the Ark of God.