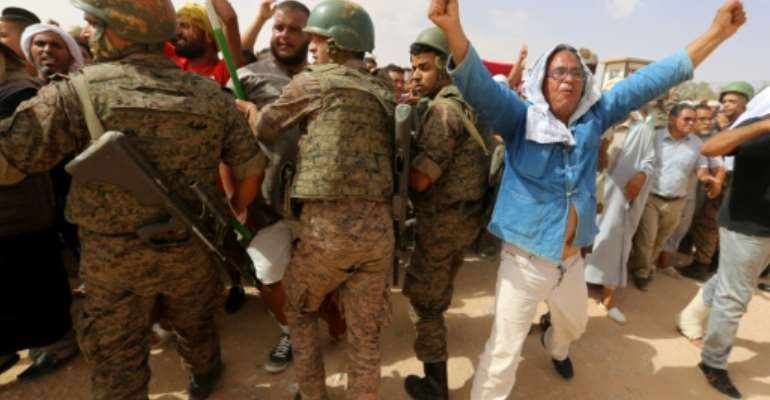 Protestors have been blockading oil and gas facilites in southern Tunisia since July demanding new investment and jobs. By FATHI NASRI (AFP/File)

Operations at blockaded oil and gas facilities in Tunisia's impoverished south have been halted for nearly two months, protesters and authorities said Tuesday, as energy firms threatened to lay off staff.

Demonstrators have been staging sit-ins and cutting off production since mid-July to demand the state follow through on promises to create thousands of jobs under deals ending previous rounds of protests.

They have cut off a key pipeline that normally transports half of the North African country's oil and hundreds stormed a crude production site, slashing gas production by around 40 percent and halving that of oil, according to the energy ministry.

"Our sit-in will continue and the oil valves will stay closed pending a meeting with the new government soon," Khalifa Bouhaouach, a protest organiser, told AFP.

The protests in the long-marginalised southern region of Tatouine have come as bitterly divided politicians in Tunis, some 420 kilometres (260 miles) to the north, squabbled over the formation of another new government to lead a country wracked by economic woes and the coronavirus pandemic.

Demonstrators are demanding that the new government of Hichem Mechichi, sworn in last week, honour a 2017 pledge to invest millions to develop the region.

Tunisia's south is one of the countries most marginalised regions, burdened with above-average unemployment, failing infrastructure and a stunted private sector.

In July dozens of demonstrators set up a protest camp in the desert near El-Kamour, before hundreds forced their way into the oil production site on Thursday, pushing their way past troops deployed to guard it.

Tunisia's modest oil sector normally produces up to 40,000 barrels per day, just over half of it from Tataouine, where Austria's OMV, Italy's ENI and Anglo Tunisian Oil & Gas have exploration rights, according to the energy ministry.

Successive governments have promised more investment in the region, but many of these promises have not been fulfilled.

Officials in mid-August proposed creating 250 jobs over three years, according to Bouhaouach, who slammed the offer as "unacceptable".

Tataouine already suffered over 30 percent unemployment, one of the highest rates in the country, before the coronavirus pandemic wiped out thousands of informal jobs and strangled illicit cross-border trading networks with Libya and Algeria that bring vital income to many of the region's households.

Energy firms affected by the shutdown in early August wrote to president Kais Saied, according to media reports confirmed by the energy ministry, threatening to close down facilities and potentially lay off "thousands" of workers.