Djokoglitch: Serb's meltdown at US Open paves way for a new name on a Grand Slam trophy 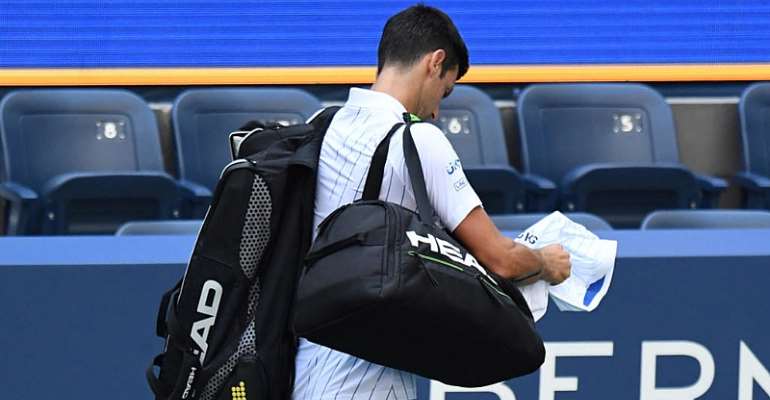 A new name will be engraved on the US Open men's singles trophy on Sunday after the sensational disqualification in the last-16 of top seed and three-time champion Novak Djokovic.

The 33-year-old was defaulted from his match against Pablo Carreno Busta on Arthur Ashe stadium after a lineswoman was hit in the throat by a ball he had struck in frustration.

The official collapsed to the ground and began gasping for air.

Djokovic raced to aid her and placed his hand on her back as she struggled to breathe. After a few minutes she got up and walked off the court still looking dazed.

Around 10 minutes of discussions then ensued between Djokovic and the tournament referee Soeren Friemel.

He eventually declared Carreno Busta the winner. The Spaniard, who had saved three set points, had just won Djokovic's serve to lead the opening set 6-5.

Void
"This whole situation has left me really sad and empty," Djokovic wrote on his instagram account.

"I'm extremely sorry to have caused her such stress. So unintended. So wrong," Djokovic said.

Djokovic, who had been seeking an 18th Grand Slam title, apologised to tournament organisers for his behaviour.

With second seed Dominic Thiem eliminating the 2014 champion Marin Cilic on Saturday, it means there will be a new Grand Slam champion for the first time since Cilic hoisted the trophy at Flushing Meadows .

"It's going to be one of the young guys who wins,” added 23-year-old Zverev who swept past the unseeded Spaniard Alejandro Davidovich Fokina 6-2, 6-2, 6-1 to set up a clash with Borna Coric, the 27th seed from Croatia.

Denis Shapovalov, the 12th seed, beat David Goffin in four sets to advance to the last eight of Grand Slam for the first time. The 21-year-old  Canadian will take on Carreno Busta.

Rules
The United States Tennis Association said Djokovic had been defaulted under the Grand Slam rules for intentionally hitting a ball dangerously or recklessly within the court or hitting a ball with negligent disregard of the consequences.

The body added that he would lose all ranking points and prize money from the tournament.

Friemel said he agreed with Djokovic that there had been no intent to injure the line judge but that it was a clear-cut case of the ball being hit angrily and recklessly."

"She was clearly hurt and in pain. There was no other option," Friemel told reporters.

The four-time US Open champion Martina Navratilova said officials had no choice but to default Djokovic.