By Perez Brisbe with Joel Olatunde Agoi in Lagos
Nigeria 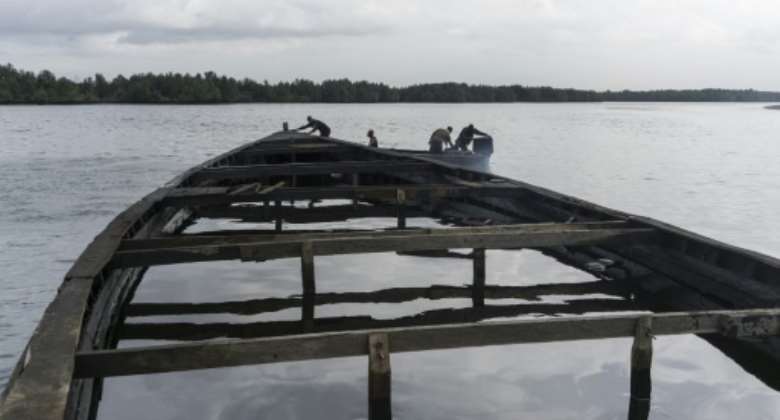 Nigeria's oil-rich Niger delta is prone to corruption and mismanagement, officials say. Here we see an abandoned boat filled with oil near the city of Port Harcourt. By STEFAN HEUNIS (AFP/File)

Investigators are looking for billions of dollars in missing or stolen funds from a Nigerian agency created to develop the oil-rich but impoverished Niger delta.

Like the rest of the nation's opaque oil sector, officials say the Niger Delta Development Commission (NDDC), based in the southern oil city of Port Harcourt, has been a pit of corruption and mismanagement since its establishment 20 years ago.

Nine states in the oil region rake in trillions of naira (billions of dollars) every year thanks to huge payments mandated from the central government and oil majors.

To date, over 12,000 projects have been approved for the commission, but only a fraction have been executed, a recent parliamentary probe revealed.

This year alone, more than 81 billion naira ($215 million, 180 million euros) have been allegedly misappropriated by officials and contractors, with some believed to have been spent on international flights and training while the nation's airspace was shut due to the coronavirus pandemic.

Last month, the government approved auditors led by Ernst & Young to examine the finances of the agency.

Godswill Akpabio, the minister for Niger Delta Affairs, said the appointment of a team of auditors followed a probe ordered by President Muhammadu Buhari in October.

Akpabio, himself under parliamentary scrutiny for alleged graft, said the auditors would examine projects approved by the NDDC over the last 19 years.

The cousin of former president Goodluck Jonathan (C) won a contract to build an eight-kilometre road that was never completed. By PIUS UTOMI EKPEI (AFP/File)

"Through this exercise, we will know the amount of monies that have gone into the region in the last 19 years and whether the value we have received so far are commensurate with the monies that have entered into NDDC," he said.

In a public hearing last month, NDDC head Kemebradikumo Pondei fainted while being questioned by lawmakers.

Despite sitting on Nigeria's multi-billion-dollar oil and gas riches, the Niger delta remains impoverished and under-developed, sparking militant unrest in the early 2000s.

Africa's largest crude producer and exporter depends on the oil sector for a huge chunk of government revenues and about 90 percent of its foreign exchange earnings.

In southern Bayelsa state, broken promises are clear to see as construction sites abandoned by NDDC contractors litter the landscape.

Partially-finished projects to protect the shoreline and build link roads to remote communities are deserted.

The project was awarded in 2013 to a company owned by a cousin of the former president but never completed.

Community leaders are upset that well-connected contractors, mostly from the region, are abandoning sites after collecting huge sums.

"I cannot tell of a project that has been completed by NDDC in this community even though we have a series of such projects," Duateki Oriango-Oruwari told AFP.

"For those of us residing in the riverine regions, we experience coastal erosion every day."

Another community head, Alex Ekiyor complained that people from the region who get the jobs are not doing them.

"What is most depressing and sad is the fact that when the government awards these projects to our own sons, they abandon them."

Several contractors denied abandoning sites, saying they had not been paid by the NDDC.

"When the money is paid, we will remobilise to site and the projects will be executed," he insisted.

He blamed unrest by angry local residents for stalling projects in the Niger delta.

Investigators are looking for billions of dollars in missing or stolen funds. By PIUS UTOMI EKPEI (AFP/File)

"While dredging sand from a river in a nearby community for the project, locals from the community seized our machines insisting that we must employ them or pay them a particular amount of money," he said.

Industry watchers however say for the ongoing probe to be meaningful, the government must stop appointing politicians and cronies into the NDDC.

"They see such appointments as compensation and not a call to service," columnist Shaka Momodu wrote recently in independent This Day newspaper.

"Such appointees resume work with eyes on the purse."

He wanted oil companies that must contribute three percent of their annual budgets to the NDDC to be represented on its board.

"It is rather bewildering that the international oil companies...have continued to look the other way despite all the looting and corruption that has taken place in the commission," Momodu said.