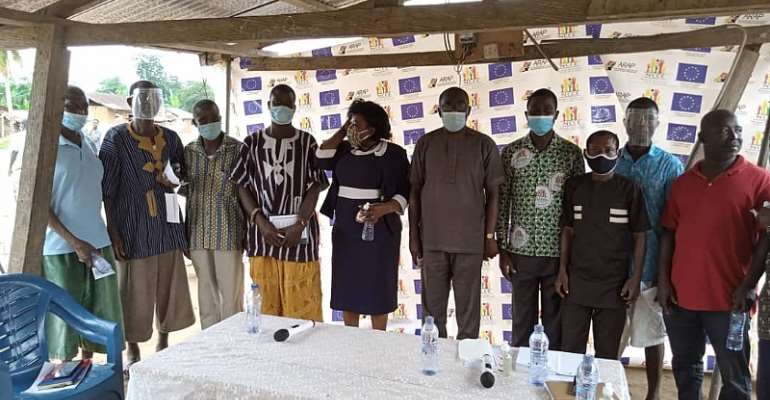 National Commission for Civic Education rolled out Social Auditing based on Article 240(e) of the 1992 constitution which states "To ensure the accountability of local government authorities, people in particular local government areas shall, as far as practicable, be afforded the opportunity to participate effectively in their governance."

In fulfillment of this constitutional provision, the Atiwa East District Directorate of NCCE Under the Accountability, Rule of Law, and Anti-corruption (ARAP) program with support from the European Union organized a social auditing engagement at Ahankrasu. The Theme for the meeting was "Citizens for Transparency and Accountability."

Mr. Ametefe said that the purpose of social auditing was an opportunity for the people to reflect on issues that affect their development as people and propose solutions to address them. He explained that the program was to afford citizens the opportunity to assess the performance of Duty Bearers in terms of economy, social infrastructure, health, education, jobs and their efficiency and effectiveness.

It enables elected and appointed officials at all levels to render account for their stewardship and be more sensitive, responsive and performance-oriented. According to him, Social auditing also promotes transparency and accountability in the country and deepens the understanding and appreciation of citizens in the governance process.

He added that that the overall objective of the program was about promoting Citizens’ satisfaction at individual, household and community levels and promoting community ownership of developmental projects, programs and policies.

Mr. Saviour Ametefe stated that the major concern of the community was the completion, furnishing, commissioning, and operation of a CHPS compound for the community. He noted that the project has been under construction for some time now.

Hon Kwabena Panin Nkansah asserted that the project is one that is of concern to the district. He stated that the plan of the project includes accommodation for a midwife and two nurses. He added that a large area of land was acquired for the project as part of a long term projection for expansion to serve a lot more people in the near future. He assured the community that the project was going to be completed very soon.

The District Chief Executive also highlighted several health projects the Assembly has undertaken within the last three years of operation. He mentioned the re-roofing, provision of an incubator, and construction of doctors bungalows for the Enyiresi hospital, the construction of a similar CHPS compound at Ankaase, Mampong, and Tiawia.

He said that an Ultramodern maternity ward and Laboratory will be provided for the Anyinam health center while the construction of a new health center for New Jejeti among several other projects are currently ongoing in the District.

He also took, the opportunity to engage the community on several other important projects, programs, and policies the Assembly has undertaken and continues to execute in Areas of Education, Social Infrastructure, job creation, agriculture, local economy among others.

The Chief of Ahankrasu, Nana Larwer Tsokpor II, expressed his appreciation to the government through the District under the leadership of Hon Kwabena Panin Nkansah for the provision of a mechanized borehole, construction of a 3-Unit classroom block and the construction of a CHPS compound in the community.

The Chief on behalf of his people also thanked the National Commission for Civic Education and the District Health Directorate for the program. He promised the support of the community in all developmental projects in the community.

He appealed to the District Chief Executive to commission the water project and the 3-unit classroom block constructed for the community.