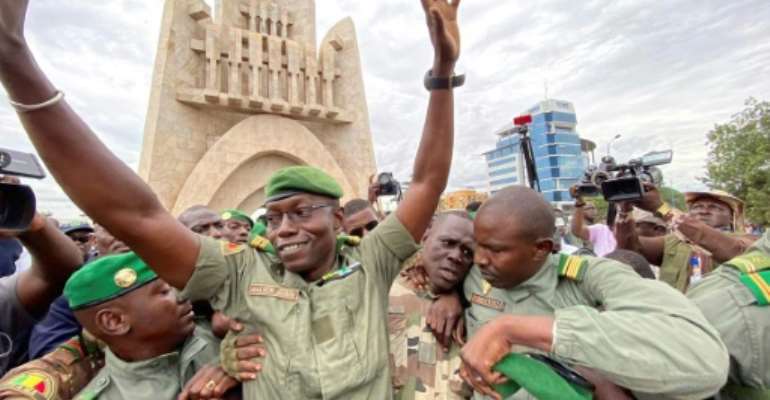 The coup is the fourth since Mali gained independence from France. By MALIK KONATE (AFP)

Conflict-riven Mali is at a crucial crossroads two weeks after a military junta took power in a coup, with calls for a thorough spring cleaning to rid the poor West African country of corruption, nepotism and misrule.

The August 18 putsch has prompted Mali's neighbours and ally and former colonial ruler France to call for a swift transfer of power, amid heightened worries over instability in a country already struggling with an Islamist insurgency, ethnic violence and economic malaise.

Swathes of Mali's territory are outside the control of central authorities and years of fighting have failed to halt the insurgency and jihadist attacks that have claimed thousands of lives since emerging in 2012.

The Institute for Security Studies (ISS), a leading think tank in sub-Saharan Africa, said the transition was a great chance for a democratic renewal.

"Ordinary Malians voiced their discontent with the rampant poverty, insecurity, bad governance and corruption," it said.

The protest coalition that campaigned against former president Ibrahim Boubacar Keita has proposed that the military junta which ousted him organise a transition to civilian rule within 24 months.

The influential imam Mahmoud Dicko, a key player in the mass opposition protests that led to Keita's ouster, warned Friday that the military rulers did not have "carte blanche".

Dicko's spokesman Issa Kaou Djim later expanded on this, saying the imam "said the people have started to doubt" the junta.

There are fears that things could get messier.

"Mali has entered a period of political uncertainty. The transition arrangements must be carefully negotiated to preserve some stability in the frail security apparatus that's been fighting violent extremism," the ISS warned.

And popular Malian rapper Mylmo released a song after the coup with lyrics including: "Too many questions in my head, History is repeating itself, Am I stupid? In fact, I worry about an illiterate people."

Imam Mahmoud Dicko has issued a warning to the junta. By ANNIE RISEMBERG (AFP/File)

Brema Ely Dicko, a sociologist at the University of Bamako, said the coup -- the fourth in Mali's 60 years as an independent nation -- was a golden opportunity to rebuild the country.

"The new Mali will not be built in a few weeks," he said. "But it's now that we need to establish the broad parameters. We can't rush, we have to sift.. The field of possibilities is large because the challenges are huge."

In the meantime, diplomats and political heavyweights are preoccupied about the transition -- how long it will last, who will lead it and the powers of the head of state.

Within hours of taking control, the junta pledged to enact a political transition and stage elections within a "reasonable time".

This was rejected by the 15-nation Economic Community of West African States, which has demanded an immediate civilian transition and elections within 12 months.

Many Western diplomats told AFP they oppose a serving military man as the head of the transition government but said they would not mind if a retired soldier headed the transition.

The hashtag #MaTransition -- or MyTransition -- is trending on social media and has thrown up a variety of suggestions.

People are on tenterhooks in the capital Bamako. By ANNIE RISEMBERG (AFP)

Some have called for a rewrite of the constitution while for others education and security are primordial issues.

The powers of the president, the prime minister and parliament need to "be clearly defined", said Abdourhamane Ben Mamata Toure, a lawyer and a former director at the prestigious Ecole nationale d'administration (ENA) which trains future bureaucrats.

One of the criticisms levelled against the toppled president is that he hogged power.

But his popularity crashed as he failed to counter the raging jihadist insurgency and brake Mali's downward economic spiral.