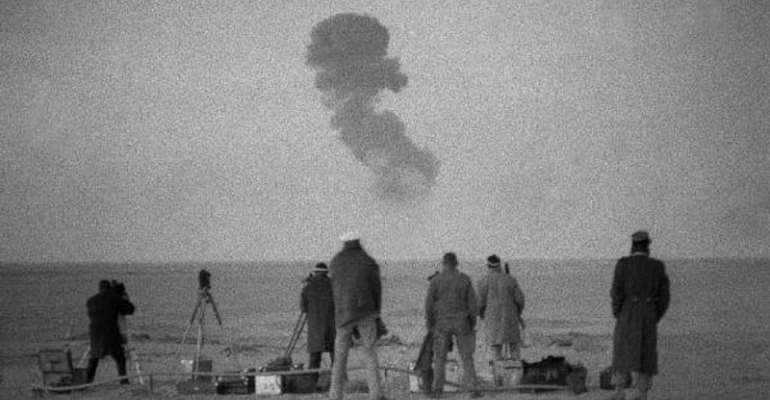 A Nobel-prize winning group has called on France to clean up nuclear test sites in Algeria where radioactive waste remains from testing during the 1960s. Local populations, it claims, are still exposed to health and environmental risks.

France carried out 17 nuclear explosions in the Algerian part of the Sahara desert between 1960 and 1966, in the western Reggane region and a zone close to In Ekker in the south.

Eleven of the tests came after the 1962 Evian Accords which brought an end to the six-year war of independence and 132 years of colonial rule.

“When French troops left Algeria, they left everything behind,” said Patrice Bouveret, spokesman for the French bureau of the International Campaign to Abolish Nuclear Weapons (ICAN).

And that included toxic waste: contaminated, radioactive elements such as tanks and planes which were “deliberately contaminated to see how they resisted a nuclear blast”, said the other ICAN spokesperson Jean-Marie Collin. Other contaminated equipment included screwdrivers and clothing worn by staff.

Some of this was buried, some was left behind and is easily accessible.

“The French buried radioactive material from 1963 onwards rather than repatriating it and didn't provide the Algerian population with information,” Bouveret said.

In their report Sous le sable, la radioactivité (Under the sand, radioactivity) the two scientists and anti-nuclear activists call on France “to give the Algerian authorities the full list of where the contaminated toxic waste was buried”.

The report found that much of the waste was in the open air and accessible by the population, creating a high level of sanitary and environmental insecurity.

“There's no security and it can still be accessed, even now in 2020,” said Bouveret.

The group added that almost nothing has been done to clean the sites, inform the populations and evaluate the risks.

It called on the French ministry of Defence to reveal the precise locations of where waste has been buried to better inform, and protect, local populations.

This is a provision under the UN's 2017 Treaty on the Prohibition of Nuclear Weapons which requires signatory states to provide assistance to populations affected by nuclear testing and to decontaminate affected areas.

Algeria is in the process of ratifying the treaty while France has refused.

Forty-three countries have ratified the treaty so far; 50 are needed for it to go into effect.

The report comes ahead of the UN's International day against nuclear tests on 29 August.