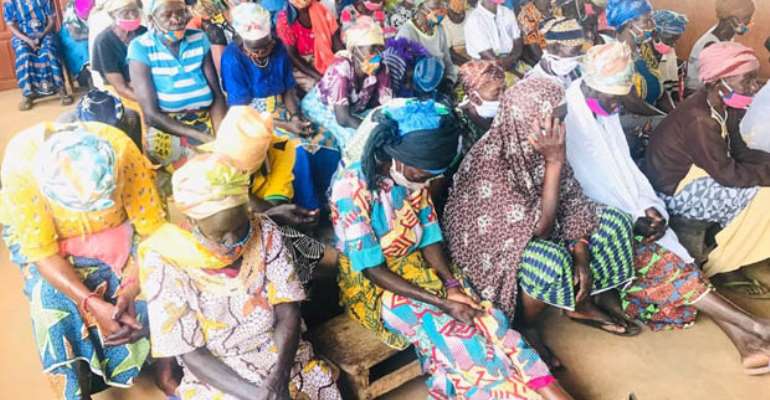 Some alleged witches mourning their colleague at the Gambaga camp

An accused 60-year-old witch has died after she was forced to drink the water used to bath a dead body.

The deseased, Awula Memuna, was accused of being behind the death of a child and was therefore forced to take the water used to bath the corpse.

The deceased after drinking the water was tortured and severely beaten up.

She was then chased out of her community Gbaduri, near Gbantiri in the East mamprusi municipality of the North East Region.

The deceased however died on Friday, August 14, 2020, at the Baptist Medical Center in Gambaga due to severe health condition.

According to the Project Coordinator for the GO Home for alleged witches at the Gambaga witches camp, Sampson Laar, the deceased had to run to the camp to seek refuge after she was chased out of her community.

“When the deceased rushed to our facility and told us the story, myself and my staff could not sleep that night.”

He indicated that the deceased was made to lick the sore of the dead child.

“My brother the deceased was crying whiles narrating the incident to us,” he said.

Mr Laar revealed that the deceased was rushed to the hospital when she started experiencing stomach pains for medical treatment but it was late.

“ We tried our best but unfortunately for us, the woman could not survive it and when we contacted her children when she was seriously sick they ignored us.”

The Go Home Project Coordinator called on the police to investigate members of the community who committed the offense and ensure that they are arrested and prosecuted.

He also called on authorities to sensitize communities on abuses and brutalities because the killing and torture of alleged witches happen in the various communities and not the witches camps.

“All these wicked things they did making the woman to drink the water of the corps when the communities are sensitized they will not take the law into their own hands.”

It would be recalled that 90-year-old Akua Denteh, was gruesomely lynched at Kafaba, near Salaga in the East Gonja Municipality of the Savannah Region over allegations that she was a witch.

The incident has since sparked national outrage leading to the arrest of some seven persons connected to the killing.