Koeman in line to replace Setien at Barcelona 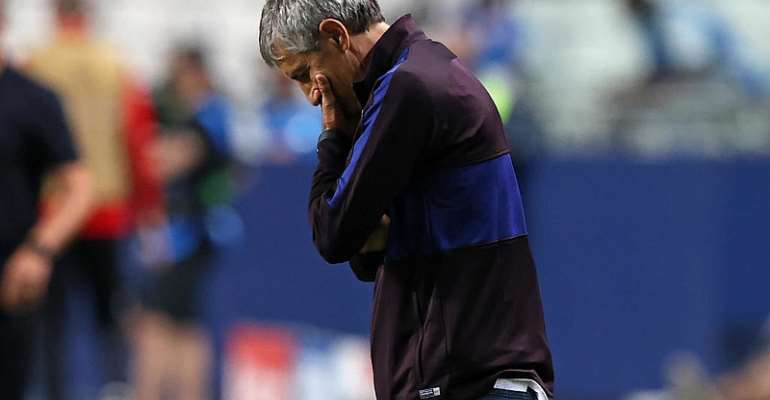 Netherlands coach Ronald Koemen has emerged as the frontrunner to replace Quique Setien who was sacked on Monday night as coach of Barcelona less than three days after leading the side into 8-2 defeat against Bayern Munich in the quarter-final of the Champions League.

Koeman, a former Barcelona player, was part of the team that lifted the club's first European Cup in 1992.

He is also a disciple of the club legend Johan Cryuff whose theories on tactics and playing style provide the ethos of the team.

Those principles were ruthlessly destroyed during the Bayern masterclass on 14 August. It was the first time Barcelona's first XI had conceded eight goals in a game since 1946.

Their humiliation was compounded by the entry of Philippe Coutinho in the second half.

The Brazilian, bought from Liverpool as the heir to midfield playmakers Xavi Hernandez and Andres Iniesta, was loaned to the German side at the start of the season and he set up one goal and scored twice in a 20 minute cameo.

Koeman's agent was understood to be in Barcelona negotiating a two year deal for the 57-year-old Dutchman.

Announcement
A bald statement appeared on social media from the club hailing Setien for his work.

"The new coach will be announced in the coming days as part of a wide ranging restructuring of the first team," added the tweet.

Setien was appointed in January but was dismissed for failing to retain the La Liga title and overseeing the quarter-final disaster.

His exit was finalised during a six-hour emergency board meeting at Barcelona's headquarters at the Camp Nou stadium.

The club also announced that next year's presidential elections, scheduled for June, will be brought forward to 15 March.

Anger
Angry supporters had hoped they would be held immediately but that possibility was ruled out, meaning under-fire president Josep Maria Bartomeu will continue.

"The board understands that the immediate call for elections is not feasible considering the league will begin on the weekend of September 12 and due to the economic and social framework caused by the Covid-19 crisis.”

Setien oversaw 16 wins, four draws and five defeats from his 25 games in charge.

They led La Liga when football was suspended in Spain as part of the government's attempts to stem the spread of the coronavirus.

When football resumed, Barcelona drew against Sevilla, Celta Vigo and Atletico Madrid to hand the title to a Real Madrid side which won all its games after the restart.