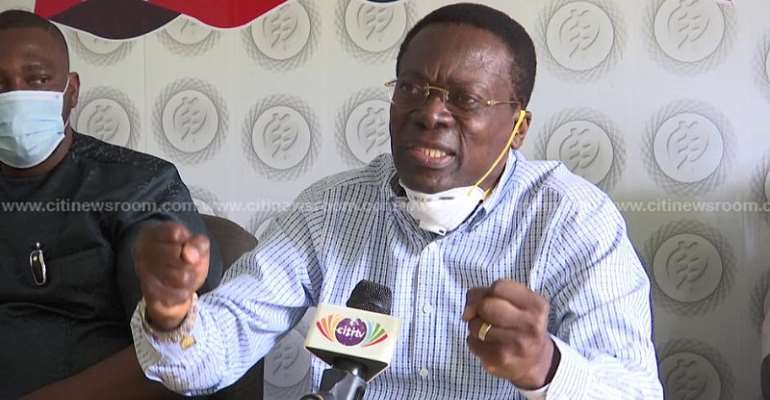 The Chairman of the Accra Caucus of the opposition National Democratic Congress (NDC) in the Western Region, George Sipa-Adjah Yankey is convinced the party will win at least 90% of the 17 parliamentary seats in the Region in the December 2020 polls.

The former Chief Executive of the Ghana National Gas Company expressed this at a ceremony to inaugurate a 30-man Western Regional NDC 2020 campaign team.

NDC currently has four parliamentary seats in the Western Region.

Mr. Yankey said the members of the committee must stay united, make sacrifices, and campaign at the grassroots level to ensure that the party’s 90% parliamentary victory is guaranteed.

“We in the Western Region are very determined to win as many seats as possible. All would however depend on us the members of the committee, the sub-committee, and even the non-members of the committees to work together as a team. Everyone should commit their energies, resources, and time to support the campaign and with this, I'm sure we can achieve anything as a team. I recently went to the four constituencies I have adopted, namely Jomoro, Evalue-Ajomoro-Gwira, Ellembele and Ahanta West. The enthusiasm I saw by the people at the various registration centres and at our meetings with our party members showed their readiness to fight for victory. So we need to motivate and encourage them through our work and get back to the grassroots. Following the flagbearer around would not win us any vote, but going to the roots of the constituencies would give us the 90 percent of the parliamentary seats,” he said.

The inauguration of the campaign team was supervised by Dr. Samuel Sarpong, a member of the NDC’s National Campaign team who urged members not to be distracted by petty internal squabbles.

“It is a COVID-19 period, so the party is not going to do those big rallies and funfair campaign. It is going to be issue-based, decentralized type of campaign where the constituencies would be detached to the branches to make sure our message gets to our grassroots. We are going to ensure that this campaign team would also take very key responsibility of special groups, thus Taxi drivers, the fisherfolks, farmers, the physically challenged and other constituents.”

The Chairman of the campaign team who doubles as the Regional Chairman, Nana Toku in his acceptance speech also added his voice to the need to ensure party unity at all levels, as that will secure victory for the NDC.

The Deputy National Organizer of the NDC, Chief Biney Nickson, in a speech he read on behalf of the flagbearer, John Dramani Mahama, assured the party and Ghanaians at large that the party is ready to win power in the upcoming general elections.

“We have been tasked by destiny with nothing less than pulling Ghana back from the edge of disaster. We are charged with executing a rescue mission to alleviate hardship and suffering. It is a rescue mission to halt the corruption and collapse of our democratic institutions and restore hope and confidence in the future.”

The campaign team members are as follows.