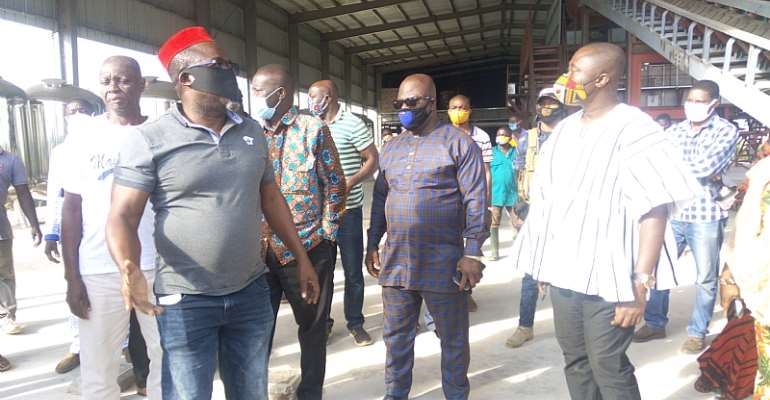 Mr. Boateng (In Red Cap) Taking The Dignitaries Round The Facility

A 3,000-tonne daily cassava processing facility under the ‘one district one factory’ initiative by government located at Abour in the Atebubu-Amantin municipality is about 92% complete.

The Amantin Agro-Processing Company Limited is set to produce industrial starch for both domestic and international markets.

This came to light when the Bono East regional minister Hon. Kofi Amoakohene and the municipal chief executive for Atebubu-Amantin Hon. Edward Owusu paid a working visit to the factory to ascertain the progress of work.

According to the farm manager of the company, Mr. Williams Kwaku Boateng all the necessary machinery are in place for the take-off of the facility.

He said the main outstanding issue is the extension of power to the facility which will require a dedicated sub-station since the factory will consume about 7 megawatts of power when in full effect.

Mr. Boateng told the minister who is also the member of Parliament for the area that all is set to start with a production capacity of 1200 tons daily, which will later expand to 2400 and ultimately a maximum capacity of 3000 tons of starch which serves as an important raw material for the pharmaceutical, beverage, milk and candies industries among others.

He said to make for an all year round production, the company is collaborating with AGRA and Agric Impact both non-governmental organizations as well as the ‘planting for food and jobs’ secretariat to support more farmers venture into cassava production.

The AAPCL currently has about 10,000 hectares of cassava ready for production whiles engaging over 10,000 out-growers for the factory which is expected to employ about 3000 people in direct labor.

On the challenges faced by the company, Mr. Boateng enumerated: bad road network from their farms to the processing center, the need for an electricity sub-station, and the activities of Fulani herdsmen as the main problems presently facing the company.

He also called for the establishment of a police post in the area to help protect farmers who sell their produce to the company and other commercial concerns that will spring up in the area as a result of the operations of the company.

Hon. Kofi Amoakohene assured the company of seeing to the improvement of the farm roads under an existing World Bank facility as well as the establishment of the sub-station for the factory to ensure the early realization of one of the ideals of the New Patriotic Party government.

The MCE told the farm manager and his team of plans to curb the activities of Fulani herdsmen in the municipality and promised to entice more farmers to venture into cassava production through education to enable them to take advantage of the opportunity offered.