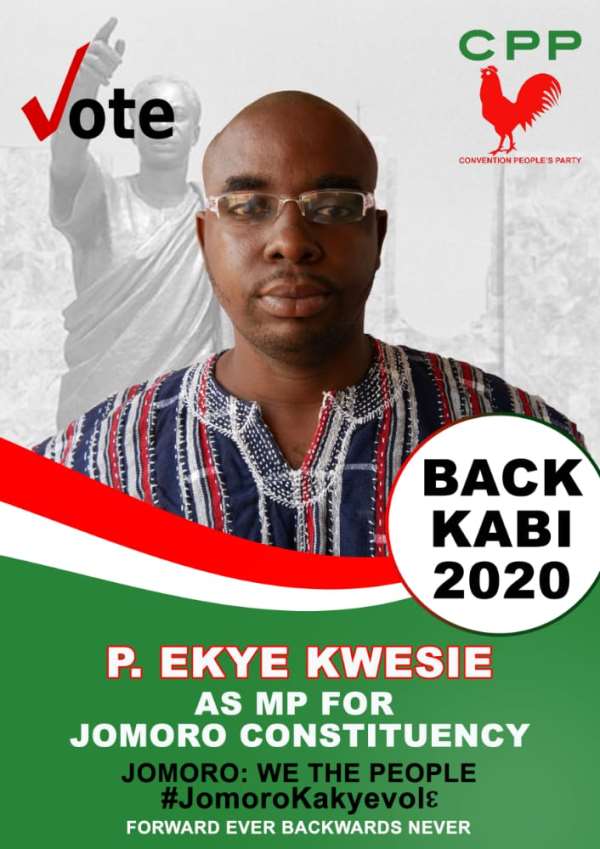 The opposition Convention People's Party (CPP) 2020 parliamentary candidate for Jomoro Constituency in the Western Region, Mr. Patrick Ekye Kwesie has accused the NPP in the area for trying hard to disqualify him from contesting in the upcoming December 7 parliamentary elections.

On Thursday, July 23, 2020, the CPP parliamentary candidate went to Nuba his hometown to register for the voter ID card which will eventually help him to contest in the upcoming parliamentary polls, but on the process of registering, an NPP registration agent picked a challenge form to challenge his (CPP) eligibility.

According to the NPP agent, the CPP parliamentary candidate is not resident of Nuba.

This resulted in a scuffle between some CPP members and some NPP members who were around.

Later, the scuffle was resolved and the voter ID card was not given to the CPP parliamentary candidate.

The CPP candidate stated that he was born in Jomoro and, "I have been in Jomoro actively since 2015 with interest in the operations of Ghana National Gas Company (GNGC) and Saipem".

Mr. Ekye Kwesie whose father was the first District Chief Executive (DCE) for the Jomoro, has said he sees the move as a surprise to him and the good people of Jomoro.

"It's is with regret to know that a son of Jomoro, someone whose father has been the most successful District Chief Executive will be challenged as not being a native of Jomoro", he emphasized.

"What's makes you think I'm not from here. What makes you think we are not natives of Jomoro. We should not allow petty politics to infiltrate our decent lives. We are Nzema, we are descent loving people", he fumed.

He claimed, "the Jomoro NPP members and its Parliamentary candidate are afraid my presence and that's why they are doing everything to let the Electoral Commission to withhold my voter ID card".

"What's makes you think I'm not from here. What makes you think we are not natives of Jomoro. We should not allow petty politics to infiltrate our decent lives. We are Nzema, we are descent loving people", he stressed.

The CPP through Samia Yaba Nkrumah won the Jomoro Parliamentary seat in 2008 and lost it to the NDC in 2012.

But, the new CPP Parliamentary candidate has vowed to work closely with the Executives to recapture the seat in the upcoming parliamentary elections.

"If there's any ploy to destroy the good image of CPP and its affiliates will be and must be treated with contempt.

Our focus is to recapture power come December 7 2020 so we can use our office to conceptualize our untapped resources.

The CPP through Samia Yaba Nkrumah won the Jomoro Parliamentary seat in 2008 and lost it to the NDC in 2012", he said.

Mr. Patrick Ekye Kwesie however, seized the opportunity to accuse the Electoral Commission of the area for delaying to call him to appear before the Registration Review Committee to prove his eligibility.

He also took the opportunity to urge his supporters to remain resolute, adding that he would fight till he is approved.

He cautioned the Jomoro MP to stop sabotaging people who are real residents of Jomoro and told him (Paul Essien) to prepare his handling over notes before December 7.

Response
Speaking to the Jomoro Municipal Director of Electoral Commission (EC), Mr. Samuel Mensah assured the CPP parliamentary candidate to remain calm as the Registration Review Committee was yet to call him other applicants who have been challenged.

"I don't know the CPP parliamentary candidate in person but I will check from the challenge form list and see because right now we have 50 persons who have been challenged and we are meeting them in batches so I will assure him we will call him when his time comes", he concluded.

However, all efforts to get the Jomoro NPP MP to respond to the claims, have been proven futile.

So far, the Electoral Commission (EC) of Ghana has registered over 50,000 eligible voters in Jomoro and the EC is expected to register over 90,000 at the end of the 38-day registration exercise in the Jomoro Constituency.