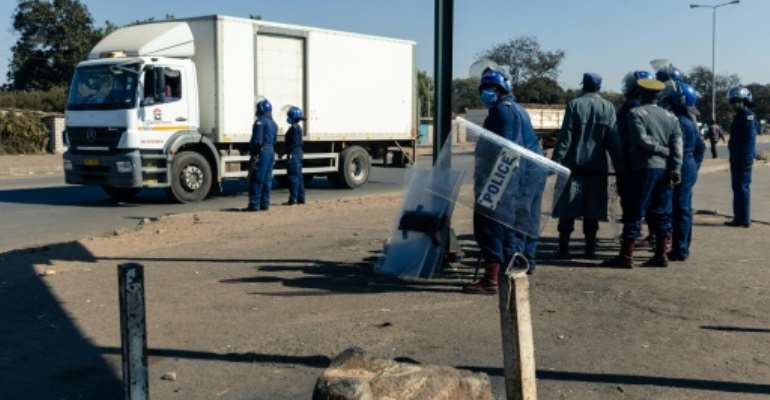 Police in Zimbabwe on Friday arrested internationally-aclaimed novelist Tsitsi Dangarembga as they enforced a ban on protests coinciding with the anniversary of President Emmerson Mnangagwa's election.

Dangarembga, 61, was bundled into a police truck as she demonstrated in the upmarket Harare suburb of Borrowdale alongside another protester, an AFP photographer saw.

Streets in the centre of the city were largely deserted as police and troops scrutinised documents at checkpoints to prevent unauthorised entry.

The protests were timed to coincide with the second anniversary of Mnangagwa's election, which the opposition says was a fraud.

But most people stayed at home after police on Thursday issued a ban and warned of a tough response.

"All security arms of government are on full alert and will deal decisively with any individuals or groups fomenting violence," it warned.

There were more checkpoints and roadblocks than usual on roads leading to the centre of the capital, with police and soldiers stopping cars to request identification and exemption documents allowing them to enter the city.

In the central business district, police carrying batons or riot shields were heavily deployed at intersections, an AFP journalist saw.

A police truck drove around an open space on the outskirts of the city -- a traditional assembly point that the opposition have named Freedom Square -- and a lorry with police was parked next to the parliament building.

In the suburbs, only a handful of people appeared to brave the ban.

An AFP photographer saw Dangarembga and a fellow protester, Julie Barnes, hauled into a truck full of police armed with AK-47 rifles and riot gear.

Shortly afterwards, she tweeted: "Arrested! At Borrowdale. Ope it will be OK". She also tweeted a photo of herself and Barnes, sitting on the floor at a police station.

She had been carrying placards calling for reforms and the release of Hopewell Chin'ono, a prominent journalist arrested last week under a government crackdown.

Minutes before her arrest, she told AFP: "It seems that there has been a big reaction by the authorities to this protest.

"They declared it illegal -- I'm not quite sure (why), apart from the fact that they don't want it. Section 59 of our constitution gives Zimbabweans the right to demonstrate peacefully and that's what we are doing."

The Cambridge-educated author is the only Zimbabwean woman writer to win the Commonwealth Writers' Prize and has often been praised for speaking out on women's issues.

She leapt to prominence in 1988 with "Nervous Conditions", a coming-of-age story about a girl's battle to escape poverty and gain an education. The book became an instant classic.

Her arrest came days after her latest novel, "This Mournable Body," entered the long list for the Booker Prize.

Among several other people arrested on Friday was Fadzayi Mahere, a lawyer and spokeswoman for the the main opposition, the Movement for Democratic Change-Alliance.

Mahere live-streamed via Facebook images of riot police scaling metal barriers into a suburban eatery where she had retreated after her protest, and arrested her.

The government had denounced the protests, calling them an "insurrection".

Mnangagwa took over from longtime ruler Robert Mugabe after a coup in November 2017.

But hopes among many that he would end Mugabe's disastrous economic slump have been dashed, and many Zimbabweans say they are worse off than before.