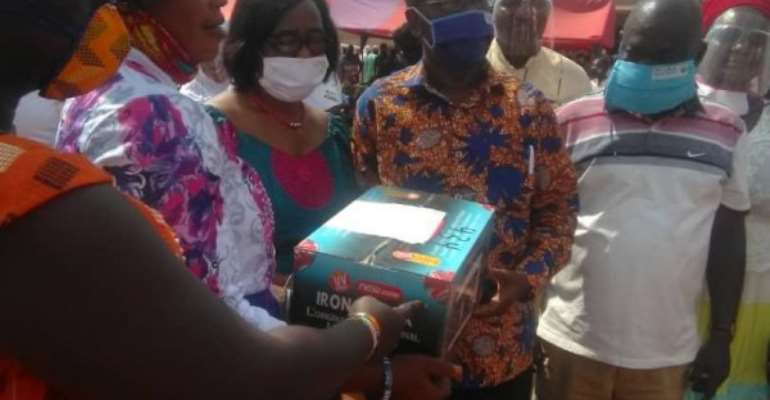 Professor Kwesi Yankah, Minister of State in Charge of Tertiary Education, has hinted that government has completed the necessary documentation for the establishment of the University of Entrepreneurship.

This, he said would provide Vocational Skills to offer skills training for Ghanaian youth to boost the private sector.

According to Professor Yankah, the University to be named after the late renowned Ghanaian entrepreneur, Mr. Appiah Minkah, when completed, will offer opportunity for small, micro, medium business operators and artisans to study in-depth business managerial skills.

The University, which will be the first of its kind in West Africa, will be established in Greater Kumasi in the Ashanti Region.

The Minister of State made this known when he presented equipment to 20 hairdressers and dressmakers selected from various parts of Agona East District for them to train apprentices in their areas to curtail youth unemployment.

Others are standing and wall hair dryers, steamers, ceramic machines and hand dryers.

Professor Yankah said the university would award certificates, diplomas and degrees, masters and doctorate degrees to business operators as well as artisans to improve quality and enhance business development.

The Minister of State stated that the government has given priority to vocational and technical schools, which were currently enjoying free education as part of the efforts to give more skills training.

He stressed that the government was committed to offering assistance for more Youths to acquire skills training to enable them become self-reliant.

The presentation of equipment to hairdressers and dressmakers, he noted, would go a long way to support their work and train more apprentices at reduced cost to help combat poverty.

He took the opportunity to enumerate a number of interventions the government was undertaking to boost the livelihoods of the people to include; the distribution of bags of fertilizers to cocoa and vegetables farmers in the district free of charge to help boost their produce.

The others include; massive infrastructure in Education, roads, agriculture, electricity and job creation and others as part of a programme to give the needed facelift to the Area notably, the award of contract of the Winneba-Junction to Akim Oda trunk road to improve transportation of goods and services.

Professor Yankah called on the people in the Agona East to vote for him and President Akufo-Addo on December 7, to enable them continue their good work to enhance economic well-being of Ghanaians.

Mr Dennis Armah-Frempong, Agona East District Chief Executive (DCE) said the government had awarded six feeder roads on contract to be constructed and tarred before the end of December 2020.

Mr Armah-Frempong said the Agona District experienced major infrastructural development in the past three and half years of Akufo-Addo's Administration, which made significant impact on the lives of the people.

He said the people of Mensakrom have seen unprecedented infrastructure in education, health, roads, electricity and others under President Akufo-Addo and pledged their support to rally behind his government to continue the good work.

Nana Kojo Amoakwa V, Chief of Agona Duakwa, for his part cautioned the youth to desist from violence and bury their political differences and assist the government to execute its mandate.