Takoradi Kidnappings: Jury Empanelled Ahead Of Trial Of Accused Persons 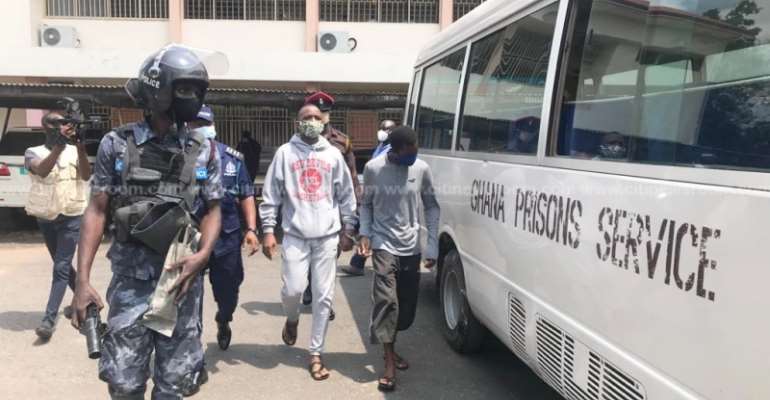 A Sekondi High Court presided over by Justice Richard Adjei-Frimpong has today, July 29 empanelled a seven-member jury in the trial of the accused murderers of the Takoradi kidnapped girls.

The empanelling of the jury met stiff opposition from the two accused persons, Samuel Udoetuk Wills and John Orji, as each without any reason objected to six out of the 13-panel members called.

Their rejection of the jury members only came to a halt after the court reminded them that each had a right to reject up to three jury members without justification, beyond which they have to provide reasons.

The Presiding Judge, then swore in the remaining seven jury members of different backgrounds from the public service with a caution to avoid any compromise of their mandated duty.

“Your duty is to basically act as the court to give a final ruling. Pay attention to all proceedings to help you in the final decision which rests with you. It is a case of public interest that has travelled for long hence always be mindful of your sacred duty. Be punctual and not to be swayed by what goes on outside or in the media and don't discuss it. Your are judges yourself and don't behave anyhow since you will face the law if you breach your oath.“

The State Attorney leading prosecution, Patience Klinogo reading the charges of “conspiracy to murder and murder” told the court that the police forensic results of human remains found at Kasawurodo proved 99.99 percent confirmation that they were the remains of the four Takoradi Kidnapped girls hence their charge.

The accused murderers, who at the previous sitting requested for legal representation, finally got one, after the court wrote to the Legal Aid.

The lawyer for the accused murderers, Mark Bosia, prayed the court to grant him access to relevant documents in the case.

He also prayed the court to allow the accused persons access to some of their belongings including gadgets and money taken from them at the time of their arrest which the judge granted.

Mr. Bosia speaking to Citi News after proceedings justified his request and preparedness to fairly represent the accused murderers.

“My request was in respect of their items in their possession at the time of their arrest, which are with the police and they say they need them. This is because those items including money are not needed for the conduct of the case. They would not be needed as an exhibit for the case so they should be released.”

“I was not initially in the matter…and since there was no relative around, I now have to take time and steps to get the documents and study them for the conduct of their defence. I also needed access to them from time to time to have a discussion with them in the same way the prosecution is also liaising with the family of the murdered kidnapped Takoradi girls.”

Justice Richard Adjei-Frimpong adjourned sitting to allow the trial to begin on August 6.