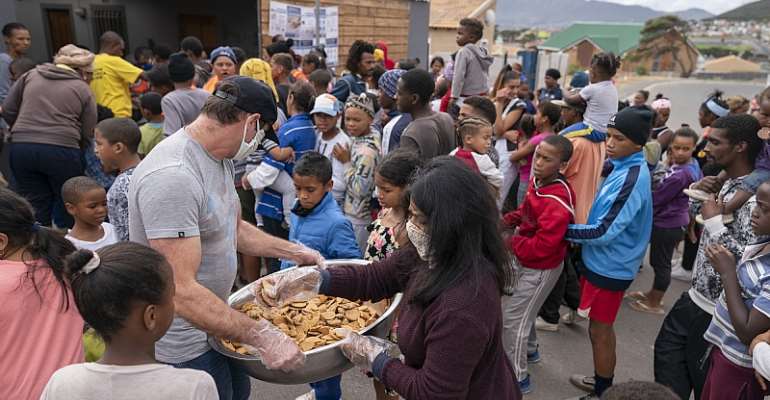 When South Africa entered a hard lockdown on 27 March, the government was globally recognised for taking tough steps to “flatten the curve” and keep COVID-19 infections low. Four months on, our research , using data from a broader national survey , shows large groups of households are experiencing tremendous hardship as a direct result of the lockdown.

Two out of every five adults interviewed between May and June reported that their household had lost its main source of income since the lockdown started. This has had devastating consequences for household food security and hunger.

In total, nearly 1 million food parcels were provided by the organisations considered in this study, including government. These may have reached about 5 million people.

But the response was neither wide nor deep enough to overcome the devastating implications of job or income losses on household food insecurity. Furthermore, gaps in government responses emerged. Administrative challenges in expanding social assistance and social insurance delayed the provision of relief to some households.

The suspension of the national school nutrition programme , which usually reached 9.6 million children , stifled the provision of a consistent daily supply of meals.

Our research shows that the country cannot let up on any of the three channels of social protection if it's going to stave off mass, chronic hunger. Failure to do so could deepen an emerging humanitarian crisis and hamper economic recovery.

Our research was undertaken as part of the National Income Dynamics Study – Coronavirus Rapid Mobile Survey ( NIDS-CRAM ). This is a broadly nationally representative panel survey of 7,000 South Africans done every month. The aim was to provide rapid data on key outcomes such as unemployment, household income, child hunger and access to government grants.

To complement our analysis of this quantitative data, we conducted telephonic interviews with key informants who were able to provide information about the provision of food relief during lockdown.

Some of our findings were that:

As South Africans have experienced significant shocks to their livelihoods, the threat of hunger presents a major concern for health, political and social stability. The nation cannot rebuild and recover economically when large groups of people are hungry.

Read more: Why South Africa needs to ensure income security beyond the pandemic

The country must continue to use all three channels of social protection as effectively and efficiently as possible. For this reason, we support current social policy efforts, and make further suggestions to strengthen the three arms.

First, urgent attention needs to be given to rectifying technical glitches that exist in the UIF system.

Second, it is critically important that the government continues expanding the reach of the grant system through the COVID-19 social relief of distress grant .

Despite the technical challenges of rolling out this grant, enrolling more South Africans in a formal social protection system would enable the government to respond quickly in getting emergency relief to more households – now and in the future.

We also believe that continuing grant top-ups for three more months until January 2021 is critical. This is particularly true in view of the projected contraction of the economy by 7.2% . It will thus take much longer for the economy to recover enough for people to find jobs.

Additionally, the need to resume the school feeding scheme is a non-negotiable to alleviate child hunger, regardless of school closures. And the government could make better use of NGOs, and other civil society organs, to scale up the provision of food assistance to people who are hard to reach through social insurance, social assistance or the state's social relief efforts.

The financial sustainability of the social sector and its social relief efforts will require the mobilisation of corporate social investment and philanthropic giving for food security.

Bokang Mpeta , a project manager at Funda Wande, was a co-author of the paper this article is based on.

Gabrielle Wills is a researcher with Research on Socio-Economic Policy, Stellenbosch University.

Leila Patel receives funding from the Department of Science and Technology (DST) and the National Research Foundation (NRF) for her Chair in Welfare and Social Development.

More Article
Modern Ghana Links
Our 'whom you know' canker
Rawlings, The Tribute: The tenderness in his toughness
Ghana's unstable building problem is about more than lax regulation
How Kenya's new personal data protection law could affect researchers
Pasha 92: How we discovered two new giant radio galaxies
How young Kenyans feel about farming goes against conventional wisdom
Jonas Gwangwa embodied South Africa's struggle for a national culture
The approved covid-19 vaccines: Series of clinical trials is the way to go in Ghana
Why wait till I am no more?
Election Reports Quotes Dossiers
TOP STORIES