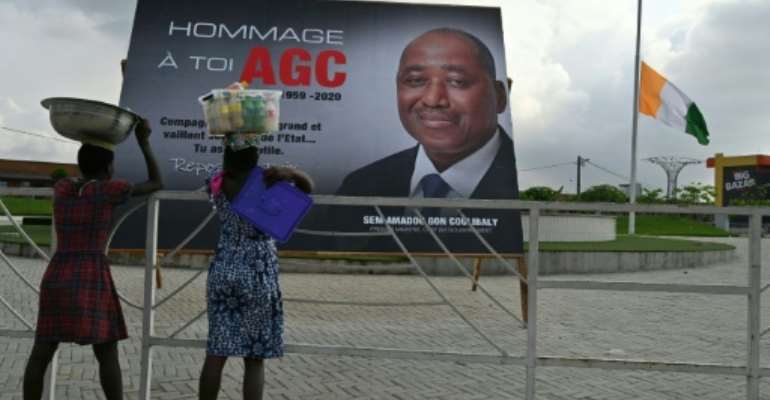 The president's chief of staff described Coulibaly as "the visible image of all the decisions that led to the prodigious rebirth of the country". By Issouf SANOGO (AFP/File)

The West African state of Ivory Coast on Tuesday bid an emotional farewell to late Prime Minister Amadou Gon Coulibaly, the front-runner in looming presidential elections who died on July 8 from a heart attack.

Representatives from France and Senegal attended a ceremony at the presidential palace to honour Coulibaly, who died at age 61 after receiving heart treatment abroad.

Coulibaly was named in March as the candidate for President Alassane Ouattara's RHDP party in October's election, ending months of speculation that the 78-year-old incumbent would run again.

Education Minister Kandia Camara made an emotional tribute at the event to honour the "great president that he would have been".

"Fate is cruel," said Adama Bictogo, the executive director of the RDHP party.

"He would have been a great president. Gon Coulibaly had become part of the collective consciousness of Ivorians. The Ivorians had discovered a man who embodied humility but who had the posture of a statesman," he said.

The president's chief of staff Patrick Achi described Coulibaly as "the visible image of all the decisions that led to the prodigious rebirth of the country".

One of the world's major coffee and cocoa producers, Ivory Coast still carries the scars of a brief civil war that erupted nearly a decade ago.

In 2011, Ouattara ousted then-president Laurent Gbagbo, who refused to step down after losing elections. The months-long standoff claimed 3,000 lives and left divisions that linger today.

Coulibaly, a French-educated engineer who was appointed prime minister in 2017, had earned a reputation for hard work.

"He died on the job. You don't hold such ceremonies for a person if they mean nothing to the nation. He was a great servant of the state," Adjoumani told AFP at the end of a military parade held as part of the ceremonies.

Coulibaly's coffin, covered with the Ivorian flag, was placed on the esplanade of the presidential palace as he was posthumously awarded the Grand Cross of the National Order, the country's highest distinction.

Coulibaly is to be buried in his hometown of Korhogo in the north of the country on Friday after a week of national mourning.