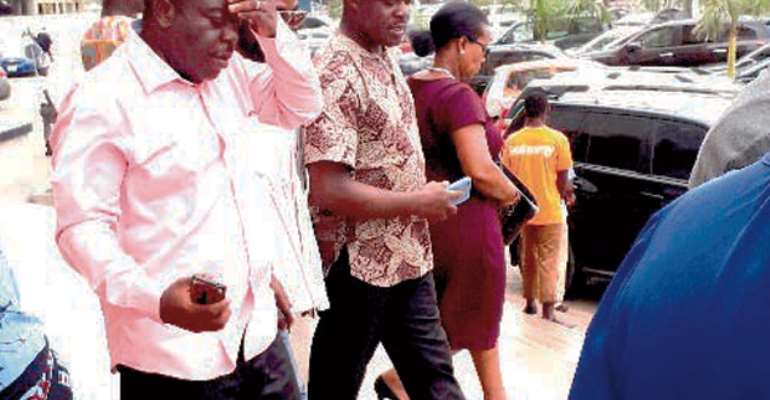 According to the lawyers of former NDC Member of Parliament (MP) for Keta, Richard Lassey Agbenyefia, their client will refund the GHC2 Million Cedis stolen from the Venture Capital during the NDC regime.

His lawyers are willing to come under Section 35 of the Courts Act which allows a person accused of a criminal act against the state to refund the stolen monies and pay restitution as well as compensations to the state.

Richard Lassey Agbenyefia is currently on trial for stealing and causing financial loss to the state and is willing to pay back the monies to the state.

DAILY GUIDE sources are saying that the former NDC MP, when successful under Section 35 of the Courts Act, could be made to refund over GH¢2 million which he stole from Venture Capital Trust Fund (VCTF), a state agency, where he was a board member.

VCTF, through the New Patriotic Party (NPP) administration under J. A. Kufuor, was established by Venture Capital Trust Fund ACT, 2004, (ACT 680) to provide financing to small and medium enterprises (SMEs). The objective was to promote and support the private sector as an equal partner in achieving the country's developmental goals by easing access to long-term funding to SMEs.

However, when the NDC assumed office, those put in charge appeared to have looted the funds and left the SME sector even poorer and, as a result, some of the culprits were currently being tried for their involvement in the loot.

Mr. Agbenyefia is on trial alongside the former Chief Executive Officer of VCTF, Daniel Duku, and four others for causing financial loss of GH¢42 million to the state between 2010 and 2015.

The former NDC MP, according to the facts of the case presented by Director of Public Prosecutions (DPP), Yvonne Atakora Obuobisa, at the beginning of the trial used the names of nonexistent companies to fraudulently receive loans from VCTF.

He is also accused of obtaining loans in the names of companies based on false representations to VCTF without the knowledge, permission or approval of the owners of the companies.

Mr. Agbenyefia who initially pleaded not guilty to the charges, thereby denying the allegation, made a U-turn last week when his lawyer announced to the trial court that they were prepared to take advantage of Section 35 of the Courts Act to refund the stolen monies.

This was after the former CEO of VCTF, Daniel Duku, and two others in the matter being husband and wife, Irene Anti Mensah and Frank Aboagye Mensah, successfully struck an agreement with the Attorney General's (AG's) Department to refund GH¢18.5 million they stole from the fund.

Last Friday, Daniel Duku and two former staff of the fund were convicted of stealing from the state by an Accra High Court presided over by Justice Anthony Oppong, a Court of Appeal judge sitting with additional responsibilities as a High Court judge.

The conviction came after the accused persons admitted guilt and came to an agreement with the AG's Department under Section 35 of the Courts Act to refund the stolen monies and pay restitutions and compensations to the state.

The accused persons are to refund the stolen monies to VCTF while the restitution and fines go to the state.

The accused persons are to make various initial deposits within seven days from last Friday and then pay the remaining amounts within three months or risk going to jail.

The agreement was struck between lawyers for the accused persons, namely Addo Atuah for Mr. Duku and Nana Yaa Nartey for the husband and wife, and the prosecution led by DPP, Ms. Obuobisa and assisted by Frances Mullen Ansah, a Chief State Attorney, Winifred Sarpong, a Principal State Attorney and Hilda Craig, a Senior State Attorney.

The former NDC MP in a U-turn is also seeking to strike a similar agreement with the AG's Department to refund the stolen monies and pay reparations as well as a fine as may be determined by the court.

DAILY GUIDE understands that this decision is necessitated by the prosecution documents filed by the AG which was 'overwhelming' and the NDC MP 'realised' he would find it extremely difficult to escape jail.

Mr. Agbenyefia has already written to the AG on two occasions but his offers were rejected as they did not meet the monies he stole from the fund and the interest accrued.

It is understood that the ex-NDC MP would pay in excess of GH¢2 million as the principal stolen money with interest accrued.

According to a source, he was willing to come back as he announced in court but his difficulty was that he was cash-strapped and may not be able to raise funds to refund the entire amount and the fine within the three-month window.

Per the law, Mr. Agbenyefia could be sent to jail for up to 10 years if he comes under Section 35 of the Courts Act but was unable to refund the stolen funds within the three months provided by the Act.

Meanwhile, the AG's Department has indicated that if by the beginning of next legal year in October 2020, the former NDC MP or any of the remaining accused persons are unable to present a tenable agreement under Section 35 of the Courts Act, they will put in an application for the trial to proceed.