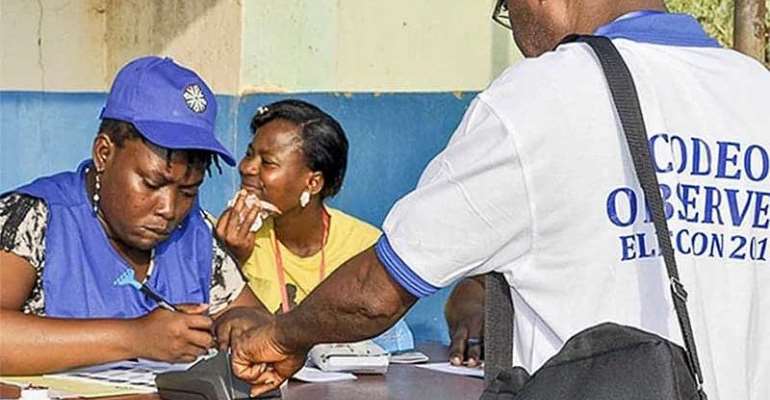 NDC has done one miracle, am proud to say they will never change, oh yes, oh yes, they will do it again.

From the point of, we shall resist the voters register with all our might and power; we shall register and vote them out; to we shall be the first in the queue and finally ‘importing’ Togolese to register. We of NPP are proud to say the NDC are full of miracles and will never change.

No man born of woman, carried in the womb for 9 lousy months, breastfed into human, carried at the back, tutored into walking and talking, treated of illnesses, moulded into human being, protected from all forms of danger will ever threaten a woman to the point of spilling her blood and that of her working colleagues is worthy of the name human being, call him or them castrated dog(s).

The Electoral Commission (EC) and her lieutenants upon careful consideration and analysis of past reports and current situations opted for new biometric voting equipment and voters register a decision that has been on the drawing cards of past EC. Reason? A weak machinery, a bloated voting register of over 900 000 plus names, an equipment that’s being controlled by an external force other than the payer. The danger of a foreign entity controlling your database is beyond quantification. The exercise of a new voter’s register that seeks to eliminate ghost names and enfranchise new youth has raised the ire of some people and parties with the demonic cult in the lead.

What is in the old voters register that the NDC is spewing fire and brimstone to never to make it happen? Threatening to make the country ungovernable? Was it because they are aware of the ghost names in the register? If the public service pay roll is laden with fictitious names and workers, then the claim by EC is an understatement. The transportation and arrest of some Togolese, Burkinabe’s, and Ivoirians from different parts of the country in their attempts to register their names on Ghana’s electoral role could be ascertained as the main reason behind all the brouhaha. This demonstrates that without these false registrations NDC can never win any elections.

Why will the NDC cry foul after the positioning of soldiers at various vantage points across our borders and almost in every region? Why will the NDC cry foul after the arrest of these imported crooks? We of NPP-SA are not taking the treats lightly. The NDC party is well known for its violence, economic mismanagement and diabolic acts. In 1979 and 1982, the then PNDC that later metamorphosed into NDC stripped our mothers and ladies naked in the full glare of passers-by and whipped them on their bare back, buttocks and private parts. Is it not the same party that kidnapped and murdered a breast feeding mother Cecilia Koranteng-Addow? NDC surrogates insulted and threatened to kill the Chief Justice Sophia Akuffo during her tenure and disrespected their own Mrs Rawlings when she filed for NDC flag bearer ship? NDC has never respected women and now they claim to be championing woman cause by electing woman as deputy to their front runner. When they tried to explain the reason for choosing a woman as vice to ex-President Mahama they still exhibited their discontent for women by saying that Prof Jane Naana Opoku Agyemang was chosen because she was a woman and never presented her credentials as basis for her selection.

Is it not the same party that promised to kidnap, murder, commit arson, just to make the NPP government ungovernable and unpopular? They have done it before and they will to do it again. In the 1980s they claim, it was a military rule and now what is their beef under a civilian rule to commit the same crime?

In centuries gone by Prophets (Kɔmfoɔ), and Chief Priests only admonish Chiefs and Government of imminent danger and how to avert it. Nichiren Daishonin of Nichiren Shoshu Buddhism retreated into self-imposed exile when the Kamakura government in Japan paid no heed to his admonitions of an impending Mongol invasion. He wrote a treatise to the government and left into the hills in Minobu, but this is not to be of wannabe prophets turned politicians.

Their Flag-bearer, party Chairman, General Secretary, Communications officers, their prophets, honchos, and pseudo illiterate graduates have all come out to lambast the rank and file of the EC for doing her job, yet such are the people who preach a change but despise change.

We dare say they did a miracle of murder in 1979, they did a miracle of Kidnapping in 1981, and we swear they will do it again. We call on the security forces to question anyone who doesn’t want the progress. We support Jean Mensah and her associates and denounce any act of vandalism, kidnapping, arsons, murder by the NDC on the character and personality of Jean Mensah. Remember no man born of human flesh and moulded by a woman will dare threaten a WOMAN discharging her duties.