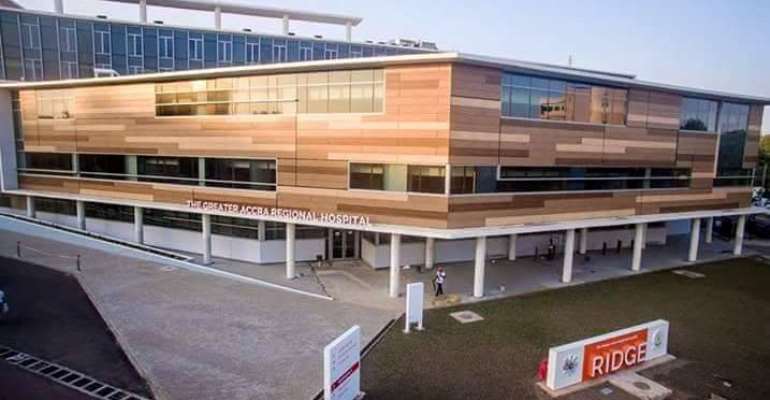 Management of the Greater Accra Regional Hospital, also known as Ridge Hospital has absolved itself of any wrongdoing in the death of a 24-year-old woman who was transferred to the facility for treatment.

It follows some media reports suggesting that the hospital failed to ensure due diligence in its diagnosis and treatment leading to the unfortunate demise of Agyemang Barbara Oforiwaa.

Relatives of the deceased accused the hospital of COVID-19 misdiagnosis.

Barbara’s relatives claimed that instead of giving her the required treatment, she was sent to the COVID-19 holding centre at the Ridge Hospital until her unfortunate death.

To them, Barbara was denied appropriate medical attention leading to her death. They are thus demanding for justice.

But, according to the hospital authorities, the alleged misdiagnosis is not a true reflection of the situation as being speculated.

“…There was no issue of medical negligence in the management of this case, neither was there any misdiagnosis. The staff at the holding centre explained the circumstances leading to the death to the family. The family did not resort to management with any official complaints,” a statement from Ridge Hospital insisted.

This denial comes in the wake of recent medical negligence accusations levelled against the Ridge Hospital.

According to the hospital, the deceased, Agyemang Barbara Oforiwaa, was seen at the emergency department of the Greater Accra Regional Hospital on 11th of June 2020 at 1:04 pm.

She was ill on arrival (with a triage score of Orange).

She was referred from Faith Mission Hospital with a referral diagnosis of acute pyelonephritis (severe infection of the kidneys).

She was managed at that hospital on an outpatient basis for malaria and – “stomach infection” (as was indicated in the referral letter).

She reported back to that facility when her symptoms worsened.

There, she was admitted and managed for urinary tract infection (UTI) and “gastroenteritis.

She was later referred to GARH for further management when her condition worsened.

She was seen by the medical team with a complaint of generalized weakness, nausea, and flank pain of two weeks duration.

After the assessment, the medical team made a diagnosis of acute pyelonephritis.

She was admitted to the main Medical ward and started on antibiotics. Basic laboratory investigations and abdominal and pelvic ultrasound scans were requested.

On day two of admission, she complained of fever and chills. Her blood oxygen level started dropping to between 93-94 percent from her initial value 97 percent with a pulse rate of 120 bpm.

She was started on oxygen at 31/mins which increased her saturation (oxygen level) to 97-99 percent.

On further examination, her breath sounds were reduced in her lung fields on both sides.

Further diagnosis of bronchopneumonia was made on account of the respiratory symptoms and fever.

A suspicion of COVID-19 infection was also considered. Arrangement was made for her to be transferred to the hospital holding bay for suspected COVID-19 patients upon discussion with the team at the holding area.

At the Holding Center, all the ongoing treatments lot acute pyelonephritis and bronchopneumonia were continued for her.

On day eight, she was noticed to be breathless intermittently. Laboratory test results indicated the possibility of clot formation and therefore the prophylactic anticoagulation treatment was scaled up to treatment doses.

Unfortunately, she passed away on 19th June 2020. The COVID-19 test result came after her death and proved negative.

Critical appraisal of the management processes of this patient indicated she received the best of care.

There was no misdiagnosis. The suspicion of COVID-19 in addition to her initial diagnosis was as per the existing institutional criteria for COVID-19 suspicion.

The transfer to the holding centre did not change the standards of care.

It was rather a good precautionary measure so that other patients in the original ward are not unduly exposed.

This is a standard protocol at the hospital. The fact that the nurse encouraged her to use a face mask while receiving oxygen by nasal prongs was appropriate because she was still coughing and the staff wanted to protect the environment other patients and the staff within the holding caner.